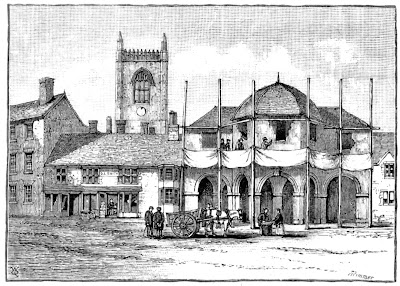 I have lots of old books with engraved illustrations, and by 'old' I mean a hundred years old or more. I have scanned some of the illustrations, which are often only about 4 or 5 inches across, and I am amazed at the level of detail you can see when you zoom in. In fact, there are details that you can't really see WITHOUT zooming in.

This picture shows the Market Place in High Wycombe, Buckinghamshire, and if you zoom in you can see that the name over the shop next to the Market Hall is 'D L Smith'. Like many of the images I have scanned, this one is undated - the date of the book is not always helpful, because the engravings are often older. This one is late 19th Century, and the 1891 census shows Daniel L Smith, grocer, in High Wycombe Corn Market. He was a single man, aged 42, with his 40-year-old sister Sarah, an apprentice and two assistants one of whom was their nephew Percy, aged 25. Ten years later in 1901 Daniel has married, and only his wife, Alice, and a servant are in the household. Daniel is still described as an employer, so any assistants or apprentices he employed must have lived elsewhere by then.

Daniel and his sister came from Hemel Hempstead, in Hertfordshire, a neighbouring county, but he did not go directly from Hemel to Wycombe, because the 1871 census finds him in Kent, working as a wholesale grocer's clerk in Canterbury, presumably learning his trade. His full name was Daniel Liberty Smith, according to his birth entry in the September quarter of 1847 in Hemel Hempstead registration district.

I haven't done exhaustive research on this person; all I have done is a few quick online searches, but it just shows how a book illustration and a little idle curiosity can uncover some family history. In this case the intriguing detail is Daniel's middle name of Liberty. Liberty is a surname associated with Hertfordshire and Buckinghamshire, and in particular with Arthur Lazenby Liberty, founder of the famous London department store, and who was born in Chesham (where I live), not far from Hemel and Wycombe. Now I wonder...
Posted by Audrey Collins at 09:00