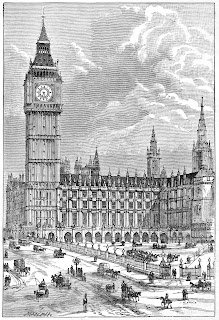 Judging from my blog statistics, about half of my followers might have had just about enough of voting in the here and now. But we genealogists are interested in the records left by ancestors when they voted too - assuming that they could vote of course, which most of them couldn't.

If they could vote you might find them listed in an electoral register or a poll book, Electoral registers are official lists of people eligible to vote, and they were required to be produced annually following the Reform Act of 1832. Poll books could be very different. They were independently published and were only produced where a publisher felt they would be commercially viable. But the main difference is that a poll book  tells you which candidate each person voted for. This came to an end in 1872, when the secret ballot was introduced.

Some poll books are very factual and neutral, recording only the bare facts, but others include detailed accounts of the election campaign, and can be highly partisan (and entertaining).

Some records are now online, but the great majority still have to be consulted in record offices and libraries. You can find local holdings by searching online catalogues like Access to Archives (A2A) for England and Wales or the Scottish Archive Network (SCAN) for Scotland. The Society of Genealogists library also holds a good selection of poll books. The British Library holds the largest single collection of electoral registers and poll books, and their comprehensive guide to the collection Parliamentary Constituencies and their registers since 1832 can now be downloaded from their website as a PDF file, all 371 pages of it!

Posted by Audrey Collins at 16:23 No comments:

My family is from Glasgow (I have to go back to my great-grandparents' generation to find anyone who was born outside the city) which was heavily bombed during the Second World War. No-one in my family was killed, but they spent many a night in the communal air-raid shelters, and there were some near misses. My mother told me about a bomb that fell during the day while she was at school. They heard the explosion and could tell it was nearby, and as the children were assembled for safety in the school hall, in the centre of the building, she was able to see that her street, directly opposite the school, was untouched. Pupils from streets that weren't visible had an agonising wait for the all-clear before they could find out if their families were safe. My grandfather was a driller in one of the shipyards, and raced home as soon as he could when he heard a bomb had fallen near his home. In the event, the bomb fell on a playing field and a sports pavilion was destroyed, and there were no casualties.

Just a few miles away in Clydebank, just outside Glasgow, another working man was not so lucky. Patrick Rocks was working a night shift in one of the many factories there on the first night of the Clydebank blitz, 13 March 1941, and returned home the next morning to find that his wife, his daughter, six sons, daughter-in-law and five young children had all been killed when a bomb hit their home at 78 Jellicoe Street. Their names, along with many other civilians killed in Second World War bombing raids, were recorded by the Commonwealth War Graves Commission. 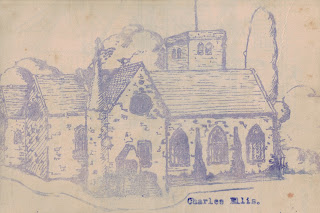 London was of course a prime target for German bombs, and although children had been evacuated from the capital to the countryside, a number of them drifted back, against all official advice. One of them was Charles Ellis, a pupil at Loughborough Central School in Brixton, South London. The school had been evacuated to Langton Matravers, near Swanage in Dorset, and despite the upheaval had managed to produce a school magazine, with articles and drawings by the children. Charles drew this picture of St Mary's Church, Swanage for the magazine which appeared in 1940, but by the spring of the following year he had returned to his home in Loughborough Road. On the night of 17 April 1941 he and his parents were killed in a bombing raid.