Shopping Saturday - Selfridges decorations for the Coronation in 1937 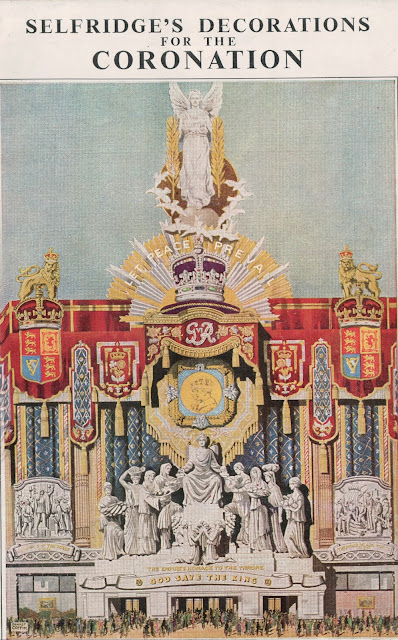 Selfridges is a store that has always known how to put on a show. A special occasion like a coronation is a great excuse to hang out the flags - literally. This week Britain has been marking the 60th anniversary of the present queen's coronation, so it seems like an appropriate time to look back at the coronation of her father, King George VI, in 1937.

The whole of Selfridge's Oxford Street and Orchard Street frontages were decorated with flags, sculptures, pictures and banners bearing the Royal arms, and the company produced a 20-page booklet, from which these illustrations are taken.

The centrepiece was a sculptural group 'The Empire's Homage to the Throne' over the main entrance, and above this was the Royal Medallion featuring portraits of the new king and queen. 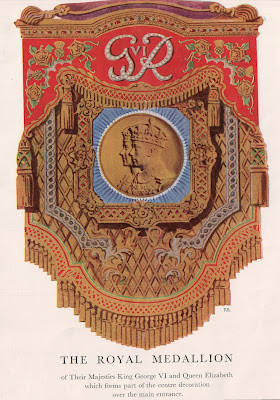 Above this was a giant representation of the Imperial State Crown, amid a gold and silver sunburst, and the whole thing was surmounted by the figure of Peace 'Let Peace Prevail' which towered 150 feet above ground level.

Just above window level on the Oxford Street front was a series of 18 bas-relief panels depicting scenes in British history, from the Druids and Stonehenge to the Armistice in 1918. These were flanked by two 35-foot high sculptures representing Canada and India. 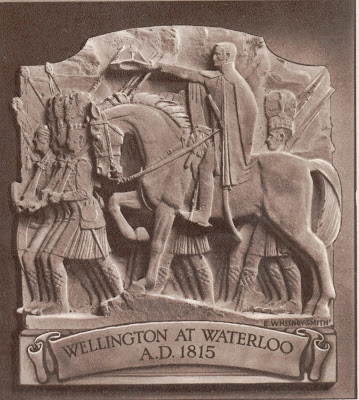 Round the corner in Orchard Street was a giant picture depicting the great seaports of the British empire, with a border consisting of the house flags and funnel markings of major British shipping companies. Either side of this were two more sculptures, this time for Australia and South Africa. Finally, each of the large plate-glass windows all round the store at street level, normally full of merchandise, contained an oil painting of a scene from the His Majesty's life. There were 30 of these in all. It must have been quite a sight. 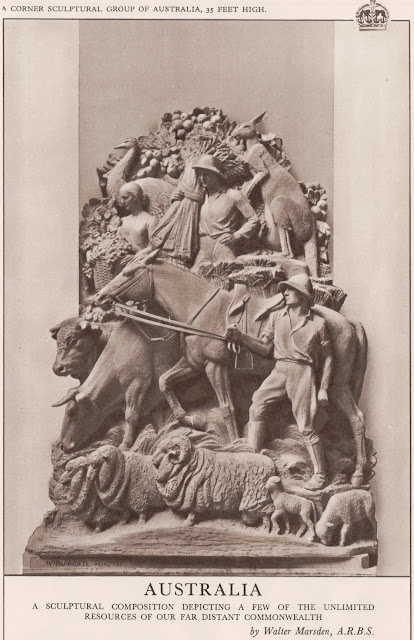 Posted by Audrey Collins at 07:00 No comments: