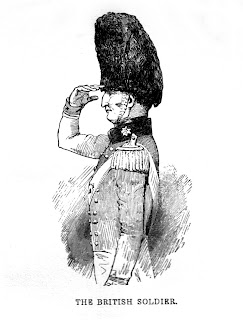 The results of a recent Friends of The National Archives project has been added to the online Catalogue. This is good news for the genealogist, as the project was the indexing of the discharge documents of more than 20,000 soldiers, held at Kilmainham Hospital in Dublin (series WO 119). Kilmainham administered the records of these out-pensioners until 1822, after which they became the responsibility of the better-known Chelsea Hospital. Many of the men are Irish, or from Irish regiments, but you will find plenty who had no obvious connection with Ireland.

The Chelsea Pensioners' Records (series WO 97) have already been digitised and indexed on Findmypast.co.uk and eventually these Kilmainham records will be onlinethere too. In the meantime this major addition to the Catalogue will make it much easier to track down some of our soldier ancestors.

It is worth noting that there are other sources for soldiers beyond the wonderful online Chelsea Pensioners' records; they will soon be joined by a series of attestation records for the militia 1806-1915 (series WO 96). There is also another set of discharge documents of Chelsea Pensioners (series WO 121), much of which has also been indexed in the Catalogue, again by the Friends of The National Archives, and the records are on microfilm at Kew. This is well worth a look if you fail to find someone in the WO 97 records. This is where I found one of my own ancestors, William Charlton, who fought in the Peninsular War. He was a private in the 74th (Highland) Regiment of Foot and was pensioned following the battle of Fuentes D'Onoro in 1811, where he received a gunshot wound to the jaw. If, like me, you are a fan of Bernard Cornwell's Sharpe books, Sharpe's Battle is the one that describes this particularly bloody episode.

These early records don't give as much information as some later ones, but I was still able to find out quite a bit about him. The document itself told me his age and birthplace, that his former trade was labourer, and gave a physical description; he had black hair, dark eyes. and I was surprised to find how tall he was, 5 feet 11 inches. Once I had found him in the pension records, knowing his regiment and dates of service meant that I could look in the regimental muster book for December 1806 when he joined the regiment. This gave me his exact date of birth, 2 November 1786, and showed that he had enlisted at Dumbarton. The muster also showed the height of all the recruits, and of the 35 men on the page, only two men were taller than William.

So thanks to these military records I know that my Irish ancestor from two centuries ago arrived in Scotland, where he spent his life after the army, before he joined up. I have some idea what he looked like, and I even know his exact date and place of birth, where the parish records didn't start  until much later. Not a bad result for an Irishman.