Death and the Working Class - an exhibition 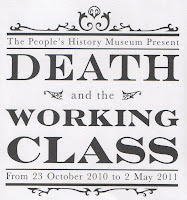 Only a genealogist would see that a museum has an exhibition about death, and instantly think 'That's where I want to spend the afternoon while I'm holiday.' Since many of readers of this blog are probably similarly afflicted, I suppose I'm in the right place if I need to form a support group.

The exhibition in question is 'Death and the Working Class' at the Peoples History Museum in Manchester, and it runs until 2 May 2011. If you are in the Manchester area it's well worth a visit (and it's free, though donations are appreciated).

The exhibits were a mixture of documents, artefacts, film and audio clips. some of my favourites were the newspaper clippings, many of them concerned with scandals involving contractors short-changing poor law authorities on pauper funerals - which were bargain basement at the best of times- and other abuses. There was also a section on burial societies, where poor people could pay a small insurance premium so that those who had very little in life could at least have a dignified funeral.

The artefacts included embroidered samplers, made by young girls in memory of their dead siblings, all the more affecting for the less than perfect spelling. There were some examples of mourning wear, including undertakers' garb, and something I had never seen or heard of before, a Bakelite coffin.

If you were poor in Victorian Britain, your life expectancy was lower than the middle and upper classes. Although some diseases were no respecter of persons, if you lived in dirty, overcrowded conditions in city slums you were more vulnerable to the contagious diseases that were endemic there, because you had nowhere to escape to. And then there were the occupational diseases you were susceptible to if you worked in a cotton mill, for example, which many of Manchester's population did. This is not counting the many industrial accidents that occurred in an age before any health and safety measures. Factory conditions were bad enough if you were alert, but at the end of a long working day a lapse of concentration by an exhausted worker could cost them their life.

All this was fascinating, if sobering, but of course the things that really make the genealogist's pulse race are documents. The ones that caught my eye here were the sextons' registers. We are accustomed to looking for death certificates, obituaries, gravestone inscriptions, probate records and of course burial registers, but sextons' registers are not quite the same. They are closely related to burial registers, but while burial registers record the burials (obviously) in a prescribed format since 1813, for the Church of England at least, the sextons' registers record the opening of the graves. Those on display here records the causes of death, which you would not normally find in a burial register. Manchester seems to very well served in this regard, but I have to confess it's not an area I have ever looked at very closely in the past. Perhaps I should.