The more I study my family history, the more I find women making their way in the world without men. Some of them were widows for a number of years - not all that surprising, since women generally live longer than men. Some of them had husbands who must have been around at the conception of their children, but don't seem to be around for much of the rest of the time, and a couple never married but produced children anyway. But the one that touched me most when I found out about her was my great-great grandmother, Jane Hanavan. 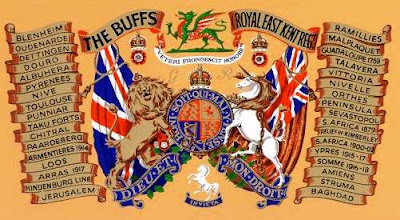 She came from Ireland, and she married twice. Her first husband, Michael McDonough, was a soldier, in the 3rd Regiment of Foot, the East Kent Regiment, known as the Buffs. He was also Irish, possibly from County Clare. During this first marriage, Jane followed her husband's regiment and gave birth to their four children in County Clare, Dover, Limerick and 'England' in that order. When her youngest child was only two years old, Michael died, not heroically in battle, but, like many soldiers, of the entirely unglamorous cause of dysentery. I have yet to work out how she made her way to Dublin where she married her second husband, my great-great grandfather Thomas Cross less than a year later, presumably with the four young children in tow.

Thomas was from County Tyrone, but the family settled in Glasgow, where Jane gave birth to four more children. She would have been on her own with the children for much of the time, since Thomas was a merchant seaman, and was away a great deal. He certainly was never at home with them in any census - although I am now counting the days until the Scottish 1911 Census is released to see if he was at home then. Poor Jane gave birth to her seventh child, a son called Thomas, in 1889, but the poor little mite died of acute bronchitis when he was only nine days old. She registered both the birth and the death herself, so it is possible that Thomas never even saw the son who was named after him.  A year later she had another son, William, who died of scarlatina when he was four. By now Jane was in her forties (I don't know her exact age) and had suffered the loss of a husband and two sons. You'd think this was enough tragedy for one person, but fate hadn't finished with her yet.

Widowhood might be considered an occupational hazard when you are married to a soldier, but when you are in your 60s and married to a civilian, you do not expect to become a war widow. But this is just what happened to Jane. During the First World War, Thomas was among the crew of a merchant ship, the Ermine, that was commandeered by the Royal Navy as a fleet messenger, and in 1917 the ship was torpedoed and sank, with the loss of most of the crew, including Thomas. He was just in the wrong place at the wrong time. Jane died two years later, of a cerebral haemorrhage, but the family said she died of a broken heart. This last bereavement must have been just too much for her. Her granddaughter, who is still alive, never knew her, but was told by her mother that Jane was never the same after Thomas' death. She said that they had to watch her carefully at night, otherwise she would go and stand at the street corner in her nightdress, waiting for her Tommy to come home.