March - and census month is here! 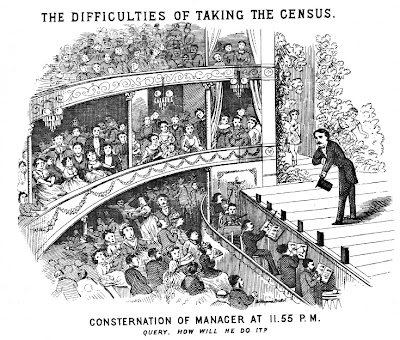 Here we go again. It hardly seems like 10 years since the last one, but the 2011 Census will be taken on Sunday 27 March. Anyone remember 'Count Me In', and the enumerators' yellow satchels? I was a self-employed researcher then, and in 2000/2001 I was working on the  best freelance commission I ever had; the Office For National Statistics engaged me as their official historian for the Bi-centenary Census. It was a researcher's dream. When you are doing commissioned research you have to stick to the brief, even if it the line you are following is hard going or, even worse, dull.
This was different. I needed to find interesting census examples with a good geographical spread throughout England and Wales. While a few of the Census Area Managers (CAMs) had made specific requests for people or buildings in their areas, most had not, so I pretty much had a free hand, and could follow up things that looked interesting, and drop the ones that didn't. The only other restriction was that ONS asked me to go easy on the examples of enumerators complaining about their pay and conditions, because they were still trying to recruit enumerators for 2001!
It really wasn't that long ago, but looking back, it's amazing how much has changed in the world of research in that time. For one thing, two more censuses have been released since then, owing to the early release of the 1911 census for England and Wales. For another, the only census that was fully indexed was 1881, so that accounted for quite a lot of my examples. There were no online census images - the 1901 project was still a work in progress, not released until January 2002.
ONS wanted colour images to print out for publicity in the various areas, but it wasn't possible to get such a large number of original documents copied by the (then) Public Record Office in the time available, so I got the best quality prints I could from the films, and the images were superimposed on a coloured 'document' background. It worked just fine, and probably cost less too.
As well as some of the most enjoyable research I ever had to do, I was interviewed for radio, TV and newspapers, and even appeared on BBC Breakfast News live (they send a car). I was also invited to the official launch party, where I got Ainsley Harriott's autograph and free cake. I owed all of this to Susan Lumas, author of 'Making use of the Census' who had been approached by ONS, but had recently retired  and did not want to take on the work, so she very kindly suggested me. Thanks again, Sue. Not that she'll read this - she doesn't do 'online'.

Email ThisBlogThis!Share to TwitterShare to FacebookShare to Pinterest
Labels: 2011, Census