Census day - has it really been 10 years?

Yes, of course I have completed my census form, but to be honest, I am much more at home with the Victorian and early 20th Census than with the ones where I am enumerated. So anyone looking to me for pearls of wisdom on the subject will be disappointed (and just a little desperate, I think). However if you really want to know more about the current census and future ones, if any, there is an interesting article at the Warwick Knowledge Centre

I was particularly interested in the last census, in 2001, because I was engaged by the Office For National Statistics (ONS) as their official historian. Not as grand as it sounds, but great fun all the same. much of what I had to do was to find interesting examples, with a good geographical spread, and I had a pretty free hand with this. There were a few specific individuals and buildings whose census returns I was asked for, but most of the Census Area Managers (CAMs) had no special requests, so I could do what I liked. Some of those who did make requests had an imperfect grasp of history and time-scales. I'm pretty good at this game, but I wasn't able to come up with a census return for John Milton, for example! I worked with the some people in the ONS public relations department, and was asked to do some press, radio and TV interviews. I like to think that I contributed some ideas, too. I suggested that it might help to get coverage in some long-established local newspapers if I could find their founders in the census. I have no idea if this worked, but I still think it was a good idea! 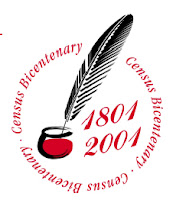 I did come up with one practical solution to a problem, though. They wanted to get colour scans, ie images from the original documents and not from the black and white film. These were to be printed and sent to the appropriate areas. Unfortunately there were far more images required than the image library at the (then) Public Record Office could supply in the time available. So I suggested that I  should obtain the best quality prints from the films, and the they could superimpose the images on a coloured background that looked like an old document. This worked remarkably well, and I still have a few copies. They are very convincing, but if you look closely, no matter what page and what census year you are looking at, the background is exactly the same colour, with exactly the same flaws round the edges.

I particularly enjoyed finding the odd and the quirky entries, the unusual occupations and the funny remarks in the census returns. I looked into the background, too, and found out a lot about how the census was organized, and how it was received by the population at large. There are some really interesting letters and editorial matter in the newspapers. Lots of newspapers have been digitized online now, so it is quite easy to search in them using 'census' as a key word, and find some real gems.This is a good reminder of just how much has changed in the relatively short time since I did my research ten years ago. There is so much that we can do online now, that it is easy to forget that searching the census then meant using microfilm, with a few surname indexes, if you were lucky.

Just for fun, you might like to read one of the items put out by ONS at the time, in the form of an 'interview' with me and my friend and former colleague, Dave Annal. It never actually took place, of course, but was put together from some of the notes we made an conversations we had with ONS back then. It is still out there on the internet, if you know where to look, and is called 'The Phantoms of the Forms - by Dusty Graves, census publicist'