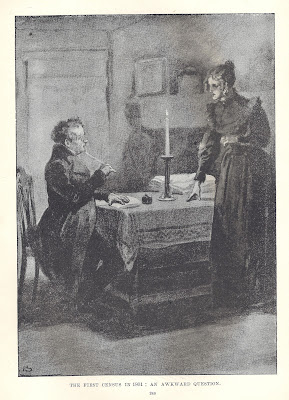 On this day in 1801 the first British census was taken. Although it wasn't the snapshot in time that the census became from 1841 onwards, so the actual day wasn't all that significant. Still, everyone needs a birthday, even a census. The picture above is from a religious magazine 'The Fireside' in 1901, to illustrate an article marking the census centenary. Unfortunately the artist seemed to be under the impression that householders filled in schedules in 1801, which they didn't, but it's quite a sweet picture all the same.

Moving swiftly on to the present day, the Census is in the news and in the media. The Guardian published a short feature this week on William Farr as part of the coverage of a new exhibition at the British Library Census and Society: why everyone counts. The exhibition runs until the end of May, and is worth a look if you are near the Library (and it's FREE). There is an evening event on Monday 14 March in the British Library Conference Centre 'Broken down by Age Sex and Religion: the History of the Census in Britain' where I will be one of the speakers. Despite that, they tell me that ticket sales have been very good.

I have another two census-related speaking engagements this month; on Saturday 19 March I shall be at the Institute of Local and Family History day conference on the Census at the University of Central Lancashire in Preston, and back at base at The National Archives, I shall be giving the Thursday afternoon talk on 24 March. I know I'm a bit of a nerd on the subject of the census, but it's just fascinating, and there's always something new to find. I've been looking at the census almost on a daily basis for twenty-something years, and I have never tired of it. It's not just me, is it?