Cotton, lots of it 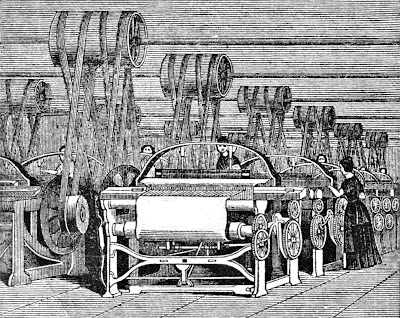 I have spent the last few days in Lancashire and Cheshire, and in particular places to do with the cotton industry. I have no direct ancestral interest in this part of the country, but many of my ancestors were spinners, spoolers, weavers or otherwise involved in the textile trade in Glasgow and the surrounding area. So I always feel an affinity with these places - Lancashire, Lanarkshire, they even sound similar.

On Sunday I visited Quarry Bank Mill in Styal, Cheshire, my favourite National Trust property. I often visit if I am in the area, and I have lost count of the number of times I have been there in the last 25 years or so. There is always something new to see, and the things you've seen before are worth seeing again. It is an 18th century cotton mill on the River Bollin, in the Cheshire countryside, dating from the time when mills were powered by water, not steam. Later steam-powered mills were in towns, and Quarry Bank Mill itself was later converted to steam power. It was a working mill until as recently as 1959. Both the spinning and weaving of cotton were carried out there, and now it is a museum to the cotton industry. 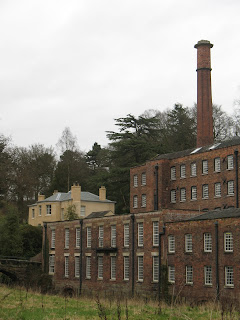 It is interesting to visit for a number of reasons. You can see demonstrations of cotton production through the ages, including hand-spinning and hand-loom weaving, that were never carried out in the mill itself but in the weavers' homes, before power-looms, water frames, mules and the other technological innovations that led to large scale cotton production under a single roof.

But of course it is the people who lived and worked there that are particularly fascinating to the genealogist, and the community at Styal is very well recorded.

Throughout its entire working history this mill was in the control of a single family, the Gregs. The founder was Samuel Greg 1758-1834 and I bought a copy of 'From smuggling to cotton kings - the Greg story' by Michael Janes, a Greg descendant. I'm looking forward to reading that.

But it is not just the Greg family who are well-recorded. The mill kept detailed records of the workers there, and in particular the child apprentices who lived in the Apprentice House. Detailed records were kept of the children, their daily routine (long and arduous), their education and health care, the accidents they had and punishments administered for . It's not a life you would want to live, or have your children live, and this is bearing in mind that the Gregs were among the more enlightened employers. Conditions for children and adults in most mills were much worse. I was also able to buy a book 'What Became of the Quarry Bank Mill Apprentices?' by the mill's interpretation manager, Keith Robinson. He consulted parish registers, census, birth and marriage certificates, the mill's own archives, but mainly the Greg Collection, now at Greater Manchester Record Office (with Manchester Archives).

For me the most evocative part of the visit is walking through the floors when the machines are running. There are only a few of them, but the noise is deafening - quite literally. The guides who work there have ear defenders, and visitors only spend a short time there, but for the mill workers of a century or two ago there was no protection, and they often lost their hearing. There is also space between the machines these days, but in a working mill they would be much closer together, like the power-looms in the picture at the top. This maximised production, but was very dangerous for the workers.

I know this before, but there's nothing quite like seeing and hearing the machines to bring home to you what the working lives of your ancestors in the textile mills must have been like. So the next time I see the occupation of 'cotton operative' 'cotton piecer' 'bobbin-winder' or a host of others, I will stop and think for a minute about just what that meant.