This month sees the tenth birthday of the ScotlandsPeople site, dear to the heart of Scots genealogists, especially those of us who don't live in Scotland any more. I think it's worth looking back over the last 10 years (and beyond) to see how much has changed in such a relatively short time. I also used the phrase 'and beyond' because it may be the 10th birthday of the ScotlandsPeople site that we know now, but the General Register Ofice for Scotland (GROS) had many of its records online before then with Scots Origins. It was in 2002 that the contract was awarded to Scotland Online, now brightsolid, who have done a great job, but we should recognise the pioneering work done by Scots Origins. This developed into the wider British Origins site, and still provides some useful resources for Scottish research.

Back in 2002 you could see online images from the Statutory Registers (births, marriages and deaths) back to 1855, the census of 1891 and then the newly-released 1901 census. A lot more records are available now, but that was pretty impressive back then, bearing in mind that for England and Wales the only online digitised resource was the 1901 census. The remainder of the holdings of GROS were added over the next few years: the censuses of 1841 to 1881  (and 1911 when it was released last year), the Old Parish Registers (OPRs) before 1855, and every year another year's worth of births, marriages and deaths. This is an important difference between GROS and the GRO for England and Wales, which only deals with births, marriages and deaths, and the closely-related records of stillbirths and adoptions. The official announcement from GROS on 18 September 2002 read:


Todays provision of birth and death registration images online, together with the earlier release of 1891 and 1901 census data, is part of the GROS's major Digital Imaging the Genealogical Records of the people of Scotland (DIGROS) project. This project will include the digital imaging of all the records held by the GROS including all open census records, statutory registers of births, marriages and deaths and parish registers of the Church of Scotland - some of which date from the 16th century. The project is due to be completed by the end of 2003 and will result in a uniquely comprehensive online resource, confirming the GROS's position as a leader in access to genealogical records wich began with the establishment of the Scots Origins website in 1998.

The next step was a significant development, the addition of records not held by the GROS but by the National Archives of Scotland (NAS).  Although NAS occupied the adjacent building, the two organisations were quite separate at the time, although they jointly set up the ScotlandsPeople Centre, and have since been combined to form the National Records of Scotland (NRS). These currently comprise Roman Catholic parish registers, valuation rolls for 1915 and wills and testaments up to 1901, with more in the pipeline. These records which are now so easily accessible are a genealogical goldmine for anyone researching Scottish ancestry.

But there is more to ScotlandsPeople than just the facility to search and view core genealogical records. In conjunction with the Court of the Lord Lyon there is also the collection of coats of arms 1692-1908. I have yet to find anyone in my family, or connected with it, for whom this has any relevance, but you never know what might turn up one day. And for people with more illustrious ancestry this collection can be very valuable. There are also some additional features available when searching that many users may be unaware of. For census records there is the facility to use a full census reference instead of searching by name - you will find this within 'Advanced search'. You may have such a reference from a citation, or have found it in one of the street indexes on the site. These are quite well hidden. You need to go to the 'Search the Records' tab, then click on Census Records in the drop-down menu and select a census year. This takes you to useful background information about that census, including a link to PDF files of street indexes. There isn't a street index for every district in every year, but large towns are usually covered (only Glasgow and Edinburgh in 1841, but increasing numbers for later years). Search results are returned as a list, but there is a button at the bottom of each results page that allows you to see them plotted on a map. This is particularly handy if your knowledge of Scottish geography is a little shaky!

I wonder what the next ten years will bring?

Births, Marriage and Death Records: a guide for family historians 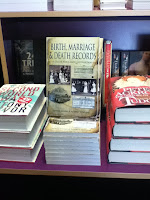 I promised/threatened some shameless self-promotion, and here it is. Our book, Birth, Marriage and Death Records is now on sale.

You can buy it in the shop here at The National Archives or order it online, using the link on the right.

Posted by Audrey Collins at 16:55 No comments:

Apart from the extra traffic that reappears on the roads with the start of a new school term, I like September. The weather is usually better than August (but it's nice to see the autumn and winter collections in the shops too, just in case). It's also the time when new family history classes start up, and when many societies re-start their talks programmes after a summer break.

I also have a book coming out at the end of the month (in my last blog post I did warn you of the shameless self-promotion to come). In fact is is a joint project with my good friend and former colleague, Dave Annal of Lifelines Research. His name comes before mine for a number of reasons; Annal comes before Collins in the alphabet; he is an established author; and he did more than his fair share of the work! It is called 'Birth, marriage and Death Records, a guide for family historians' to be published on 30 September. If you are really keen you can follow the link and pre-order it from the Pen & Sword Books site for the bargain price of £10.39.
Oddly enough, no-one has written a book on this subject before. There are plenty of books on individual topics, such as civil registration or baptism records, and chapters on births, marriages and deaths in general family history books. But while there are numerous books on the census, or wills and probate, no-one has ever put together a whole book exclusively on birth, marriage and death records. We only wish we could have made it twice the length, there is so much wonderful material out there.
But before the book comes out I have two important speaking engagements, both at the Society of Genealogists. The first is a half-day course on Tracing Scottish Ancestors at The National Archives on Saturday 22 September. This is based on a talk that I first delivered three years ago, but which has now been updated and extended. There's a lot of material, so I am looking forward to having a double-length session this time. There is a podcast of the original version that I gave onsite at The National Archives in 2009.
On the following Saturday, 29 September, I am back at the Society to deliver the opening sessions at their day conference celebrating 175 Years of Civil Registration. Hats off to the Society of Genealogists for being (as far as I am aware) the only organisation to mark this very significant anniversary. It seems to have passed entirely unnoticed as far as the General Register Office is concerned; they made a big deal of the 150th anniversary in 1987 and even commissioned a book, the excellent 'People Count' by Muriel Nissel. Perhaps they are saving themselves for the bicentenary in 2037.
You can book for both the Scottish Ancestry and 175 Years of Civil Registration on the Society's Events Calendar page. Maybe I'll see you there?