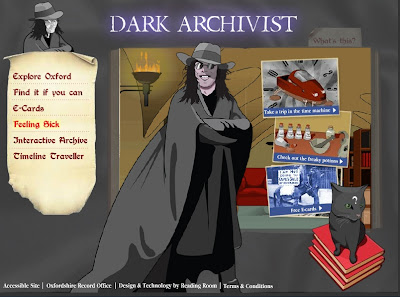 This is a bit of fun for Friday. The Dark Archivist is a cartoon super-hero, who hangs out at the Oxfordshire History Centre. This is the new name for the combined Oxfordshire Record Office, Oxfordshire Studies and Oxfordshire Health Archives. It is housed in St Luke's Church in Cowley, which was converted for use as the Record Office several years ago.

I once attended a fascinating talk and tour by the County Archivist, Carl Boardman, who told the story of how the redundant church premises were acquired to house the county archives. The church is a large one, but never had a large congregation to match. It was built by Lord Nuffield, founder of the Morris Motor Company and a great benefactor of Oxford and its university. He had the church built for the large number of new workers coming to Oxford to work in his factory, but didn't allow for the fact that they came from South Wales and most of them were nonconformists, and not members of the Church of England.

The conversion from church to record office was very nicely done, with the reading room in the former nave, and the archivist's office in the former organ loft. This gives the office a great view of the researchers below - any transgressors with pens of other forbidden items are swiftly detected. It's amazing how few people think of looking up.

The Dark Archivist was Carl Boardman's idea, and it went live in 2007. It's a different, and fun, way of looking at Oxford's history, even if you have no particular interest in the area. Although it is connected to the Oxfordshire History Centre site, it is not part of it, and the link isn't very prominent. So it's easier to find the standalone site. Have fun.

Posted by Audrey Collins at 00:33 No comments:

Here are a couple of maps that form part of my favourite document. Yes, I really do have a favourite item in The National Archives' collection, which came in handy when I was asked that very question in a job interview; well, I got the job anyway, so it can't have done any harm. The document in question is a book, mostly handwritten but with some pasted-in printed material. According to its Catalogue description it is a 'Record Book' in the extensive collection of General Register Office papers. It is not dated, but from the contents it seems to have been compiled during the 1880s. It is a compendium of useful reference information relating to the work of the office since its beginnings in 1837.

There are several hand-drawn maps, and I find this pair particularly interesting because they illustrate something that I don't think I've seen in map form anywhere else. Using information in the printed Official List of 1881,each  maps illustrates 100 registration districts. The first shows 100 districts where there were more churches (of the Church of England) licensed for marriages than there were Dissenting Chapels registered for marriages. The second map illustrates the opposite; 100 districts where there were more Dissenting Chapels registered for marriages than Church of England churches licensed for marriages. In both cases each church is represented by a black dot and each chapel by a red dot. The red ink was probably much brighter in the 1880s, but now it has faded to a shade of brown, so it does not stand out so well against the black dots. Despite this, the maps still provide a good visual rendition of the relative popularity of nonconformity throughout England and Wales.

The dots represent only churches or chapels, however, and give no indication of the size of their congregations, or of the actual number of marriages performed. The first map seems to show that East Anglia was a great stronghold of the Established Church, but the explanation of this cluster probably has more to do with the area's history than its 19th Century present. Norfolk and Suffolk were much more populous and prosperous in the Middle Ages than in the 1880s, relatively speaking. The population had actually decreased during the 19th century, as people moved to the industrial areas of the Midlands and the northern counties, and of course to London. But the churches didn't move with them. Today East Anglia is still full of small towns and villages with magnificent medieval churches, built for the much larger congregations of an earlier age.

Details like this might be interesting to explore further, and all the required statistics are in the Annual Reports of the Registrar General. Some other time, maybe.

Posted by Audrey Collins at 00:52 No comments: