My visit to Manchester and Cheshire last week renewed my interest in the cotton industry in which so many  of my ancestors - and other people's - were employed. The Museum of Science and Industry in Manchester is one of my favourites, and I particularly enjoy visiting the textiles gallery. This time I was lucky enough to arrive in good time for a demonstration of some of the machines, illustrating the processing of raw cotton into thread for weaving. They even gave out samples of cotton at various stages.

The basic principle behind turning raw cotton into thread is actually quite simple, and at Quarry Bank Mill you can see demonstrations of all these processes being carried out by hand, as it was in the days when weaving was done by hand-loom weavers working at home. First the raw cotton was carded, or combed to get the fibres to lie in the same direction. Quite young children were capable of doing this work. The fibres would be twisted together to make thread, originally by hand, but then on spinning wheels, and the resulting thread was woven into cloth.

The work would be put out to the weavers, but hand-loom weaving on a domestic scale had its drawbacks, one of which was speed. Even with a spinning wheel a spinner could only spin one thread at a time, and a hand-operated loom could only work as fast as the human operator. And the width of the material woven was limited by the reach of the weaver, who had to propel the shuttle back and forth across the loom.

Spinning and weaving moved from the home to the factory when machines powered first by water, and later by steam, were invented that could work much faster. The carding and spinning machines could handle much larger quantities of cotton than a weaver's family could process by hand, but the principle was still the same; fibres were twisted together and drawn out to make thread that was wound onto bobbins. The difference was that of a single process from carded cotton to thread, the cotton went through a series of machines, becoming thinner and stronger at every stage. The resulting thread was of a more consistent quality than a hand-spinner could produce, and of course there was much more of it.

The raw cotton was carded by machine to produce a roll called a lap, which looks an awful lot like the kind of polyester wadding that quilters use today.  This was then fed through a succession of machines to produce a thick soft rope-like substance called sliver, and eventually spun into thread that was strong enough for weaving, though not for sewing, which would have required some further spinning. The factory floor would be filled with as many machines as could be packed into the space, and because they were water- or steam-powered, the people had to keep up with the machines, and not the other way round.

The same went for the looms, and they no longer required the skills of the old hand-loom weavers. Each operative would look after a set of looms, and had to keep them supplied with yarn, which had to be threaded into the shuttles. They were called 'kissing shuttles' because they did this by sucking the thread through, a very hazardous practice. Sucking in cotton fibres mixed with machine oil gave many of these women lung diseases, and they had to work very fast, so a moment's inattention could mean that they knocked out their teeth with the metal ends of the shuttles. 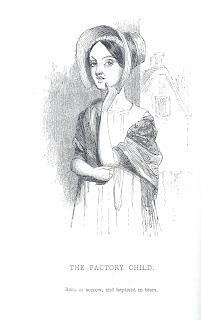 Some of the worst jobs were done by children, who were small ans nimble enough to get under the machines while they were running, to clean away the accumulation of grease and cotton dust.  If they were not fast enough, they could lose fingers, limbs, or even their lives. Many of the children were orphans, and their survival rate was not good.

Although the factory system was bad news for most hand-loom weavers, they did not disappear altogether. There was still a demand for some kinds of fancy cottons that required their skills, but many skilled men had no work, while their wives and daughters found lower-paid jobs in the factories.