1911 Scotland, England and Wales - nearly the same, but not quite 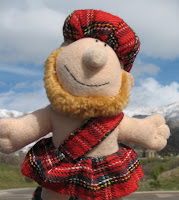 We're almost there, the 1911 Census for Scotland will be released (fingers crossed) within hours now, not days. Scotland'sPeople is bracing itself! I wish I could be in Edinburgh for the launch, but the day job takes precedence, and at least I hope I will be able to access it remotely. The site will be under quite some strain to start with, I expect, and if we can't all get access immediately...well, it's been closed for a century, a little longer won't hurt.

By now many of us are familiar with the 1911 Census for England and Wales, so we have a pretty good idea of what to expect. There is one important difference, which is that as in previous census years, the Scottish census was copied into enumerations books, and the household schedules were destroyed. This was an administrative decision by the General Register Office for Scotland. The information gathered was much the same as in England and Wales, and the tabulation was done by machine, as in England and Wales. The extra information gathered was a significant increase on previous censuses, so it will be pored over gratefully by Scottish family historians, myself included.

The lack of household schedules means that we won't be able to see our ancestors' actual handwriting, which is a pity, but a greater pity is that when the enumerators wrote up their books, they will have left out the details that had not been asked for. By this I mean the widows who provided the length of their marriage, and the number of children they had, living and dead, when the question was only addressed to married women. On the English and Welsh schedules these were crossed out by the enumerator, but are still clearly visible.

There are some differences in the questions, too.

Like the schedules for Wales, but not England, the Scottish census contains a language question; whether a person spoke English, Gaelic or both. The questions on birthplace and nationality are subtly different, though, more details being asked for in England and Wales, with one exception.

Unfortunately the Scottish census asks for the parish of birth only from people born in Scotland. Anyone born in England or Ireland is only required to put 'England' or 'Ireland'. There is no mention of Wales at all, so it may be assumed to be part of the well-known administrative unit 'EnglandandWales'. Sorry, Wales. Like those born in foreign countries, people born in Colonies or Dependencies are only asked for the name of the country, unless that country was India. And this is where Scotland requires extra information; the Indian-born are asked to state whether or not they were of European origin.

These discrepancies in the questions will make no difference to most researchers, and there is still a lot more detail than in any previous Scottish census, so we will all have plenty of new toys to play with (you did stock up on ScotlandsPeople credits before the price went up on Friday, didn't you?). The difference that will affect most genealogists is that sadly, those of us with Irish-born ancestors in Scotland can't expect to discover their exact birthplaces here. Pity. Oh well, it's back to fiendish ingenuity and the power of prayer again.

Happy Census Release Day, fellow Scots. I'm sure it's going to be PDB* for some of us.