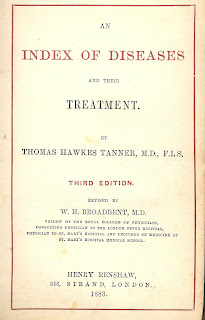 There is nothing quite like a medical dictionary to hold the attention of the reader, without the aid of any narrative. I have a few of them (not many, honestly). This one 'Dr Tanner's Index of Diseases and their Treatment' is my favourite. It lacks the grisly illustrations that you find in some others, but I like it because it is aimed at physicians, and not the domestic audience. It therefore contains a lot more detail and technical medical terms.

The main part of the book, as the title suggests, is an alphabetical listing of diseases, from Abcess to Zona, with suggested treatments. Zona, in case you are wondering, is a kind of shingles, or herpes.

This is followed by an Appendix of Formulae, with advice on dosages, depending on 'Age, Sex, Temperament, Habit, Condition of System, Climate and Season of the year'. Some of the advice is rather alarming, as in 'Children bear as large doses of mercury as adults; but they are much more susceptible to the influence of opiates'. Good to know. 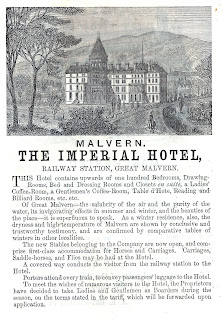 The Formulae included foods as well as drugs and potions. There is a scary-looking chapter on Electro-therapeutics, followed by a more reassuring one on Climates for Invalids, and another on Mineral Waters, by which he meant spa towns in Britain and Europe. The medicinal foods listed include such delights as raw meat juice, spruce beer and bread jelly. A whole range of therapeutic baths is described, mainly involving chemicals such as creosote, iodine and arsenic. As an alternative to baths, the patient might be enveloped in wet sheets of varying temperatures, depending on the ailment.

Many of the suitable climates for invalids were popular resorts in Britain, like Malvern, where the air is 'pure and invigorating', but for some patients the south of France, Egypt or even Australia might be recommended.

Dr Thomas Hawkes Tanner, we can safely assume, was a physician to the moneyed classes, and the book is aimed at similar practitioners. He seems to have been very successful, since the 1871 census shows that he kept 9 servants, including a butler and a footman. He died 4 months after the census, aged only 46, leaving a will worth nearly £14,000, the equivalent of more than £600,000 in today's money. The third edition of the book, dated 1883, was updated by William Henry Broadbent MD.

This book, nearly 500 pages long, gives a fascinating insight into the world of Victorian medicine. Even if only the wealthiest could afford the services of a physician like Dr Tanner, some of the simpler and cheaper remedies would have been available to many of the less well-off. And of course people suffered from much the same diseases, regardless of income, so it comes in very handy for interpreting some of those puzzling causes of death on death certificates.

Email ThisBlogThis!Share to TwitterShare to FacebookShare to Pinterest
Labels: Cause of death, Diseases, Doctors, Medicine