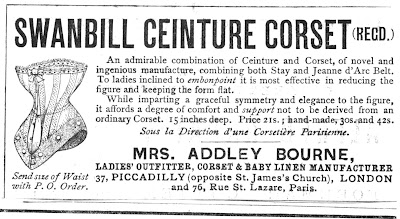 This is one of those frustrating newspaper cuttings that came as part of a bundle of assorted ephemera, without a date. It probably dates from the late 1870s, though, as I have seen similar adverts for the Swanbill Ceinture Corset dated around then. It's a fascinating looking contraption, and adds to the many reasons I am glad I live in the 2010s and not the 1870s. I have no idea what a 'Jeanne d'Arc Belt' is, but I don't like the sound of it. But once you get over the wince-inducing appearance of the thing, and the thought of what it would do to you ribcage and your circulation, the advertising pitch is interesting. 'It is most effective in reducing the figure and keeping the form flat'. Just look at the shape of it - not exactly designed to 'lift and separate' (for those old enough to remember the Playtex slogan). The 'graceful and elegant symmetry' it promises is fairly timeless, I guess, but nowadays we expect cleavage, not the reinforced mono-prow that this seems designed to deliver. It shows how concept of the ideal female form does change over time. I've been waiting patiently for thick ankles to come into fashion, but I don't think it's going to happen. Not that I'm bitter or anything.

Another feature of note is the pricing; 21s, or for a hand-made corset 30s or even 42s. It's a sign of the times that a shop in a high-class location like Piccadilly would offering ready-made items at all; a few decades earlier everything would be made to measure for the discerning and well-heeled customer. Ready-made items like this were a product of the industrial age. The most expensive hand-made item, though, was only twice the price of the ready-made one, which says a lot about the cost of skilled (female) labour in the 1870s. The equivalent modern values would be about £50 and £100 respectively. I'm not in the habit of buying corsetry of any kind, but it strikes me that £50 ready-made is on the expensive side, but £100 for hand-made would be a bargain.

Like many fashion retailer, Mrs Addley Bourne played up the French association of the firm, believing that this would lend an air of chic sophistication, and she was probably right. Addley, incidentally, was not her first name, but that of her husband. In fact it was his middle name (his first name was Benjamin) and she was Ann, but followed the practice of the time in using her husband's name, as in Mrs Patrick Campbell. It is less common today, but we have become used to Princess Michael of Kent, I suppose.

The Bournes conducted their business at 37 Piccadilly for a number of years, and retired to Sutton, Surrey at some time in the 1880s, where they died within 3 weeks of each other in 1895. The Piccadilly address seems to have been very dear to them, because the birthplace given in the 1891 census for the three children who still lived with them was given as '37 Piccadilly'.