A question of nationality 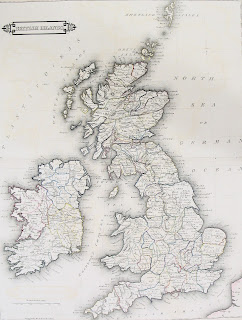 I have just read a very interesting and thought-provoking blog by Polly Kimmitt He's not American. Is he Kenyan, English or Irish? The whole business of nationality can be much more complicated that you might think. In the UK we have the added complication of the four home nations, England, Wales, Scotland and Northern Ireland. Most of us identify ourselves with one of these, although our nationality is British, as a glance at a passport will confirm. The full wording is 'United Kingdom of Great Britain and Northern Ireland' but I must admit I was glad to be able to tick 'Scottish' on my census form last week.

I have lived in England for most of my life, but I have never considered myself as English, and I never will. British, yes, but never English. I like it here, though, and I have no plans to leave; the natives seem to have accepted me. My young nephew, on the other hand, has absolutely now doubt that he in English. Fair enough, because he was born in England, and so were both of his parents, but that is a s far as it goes. But none of his grandparents came from England; one set were Scottish, the other Irish. So he could qualify to play football for any of three counties, and who knows, he might do so one day, because he's a pretty good footballer. Sorry Wales, you don't get a look in.

The whole sporting thing gets more confusing the more you look at it. In the Olympic Games and some other sporting events we compete as the United Kingdom (sometimes referred to as 'Team GB', which is wrong of course, and must annoy Northern Ireland even more than it annoys me). But in others, England, Scotland, Wales and Northern Ireland send separate teams. Except for Rugby League and Rugby Union, where Ireland is represented by combined teams drawing players from both the Republic of Ireland and Northern Ireland. Don't spend too much time thinking about it, it will make your brain hurt.

Sporting allegiance and national identity may be important to the way you feel, but the hard legal facts of nationality law can affect where you are allowed to live. Many of the enquiries we deal with at The National Archives are not from genealogists, but from people who need to prove their right to British nationality, or their right of residency in the UK. We hold certificates of naturalization and of nationality issued up to 1983, and there are lots of different kinds, depending the kind of certificate and where it was issued. It also depends on the legislation that was in force at the time. It's a complicated business. There is a Wikipedia article on British Nationality Law that explains it, but you need to set aside a good long time to read it all. Like I said, it's a complicated business.

To add to the fun, there are many anomalies in the relative status of the UK and the Republic of Ireland, and the relations between them. Britain used to be a colonial power, and when they gained their independence most former colonies and dominions became members of the Commonwealth. The Republic of Ireland, however, is not, and has never been, a member, and distanced itself from the UK to the extent that it remained neutral during the Second World War. Despite this, there has always been free movement between the two countries, and until 1978 the two currencies were of equal value, even adopting decimalisation at the same time. Irish people who lived in the UK could vote in elections here, even before our two countries joined the European Union.

In her blog, Polly describes the complications that arose because her British husband was born in Kenya, while his father had been sent there to work by the British government. Something similar occurred in a family that I am related to, where the father was Irish and the mother British. Two of their children were born in England, but one was born overseas, because her father, an Irish citizen, was a soldier in the British  Army and was stationed there at the time. She had no idea that this could cause a problem until as an adult, she applied for a passport, and discovered to her surprise that legally, she was not actually British. It was sorted out in the end, and she did get her passport, but it makes you think.