I wouldn't have looked there! 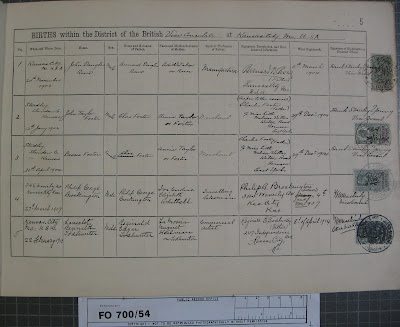 Suppose that you had a British ancestor that you knew was born overseas. Where would you look for a record of the birth? Well, there are several places where you might find it, and you might even find more than one record of the same event. Or you might not find any record of it at all. It has never been compulsory to register vital events that take place abroad, although it may be advisable to do so. If someone was born abroad and later needed to produce evidence of their nationality, a proper birth certificate would come in very handy.

Now that so many records and indexes are online, you would try a few websites first. The indexes to the General Register Office miscellaneous overseas records are on Findmypast.co.uk and FamilyRelatives.com so you might start there. The indexes don't give much detail and you still have to spend £9.25 on a certificate, but it's a start. The other place you might think of is BMDregisters.co.uk which includes a number of overseas registers, the ones in The National Archives in record series RG32 to RG36. These come from a variety of original sources, and there is some overlap with the ones that are still held by the GRO.  It's a pay-per-view site, but it's still cheaper than a certificate; or you can access it as part of a subscription to The Genealogist.

If you know the country where your itinerant ancestor was born, you might look for a record in the registration system of the country concerned. There are lots of these on sites like Ancestry.com and WorldVitalRecords.com but of course you'd try FamilySearch.org first because it is free, and you might look on Cyndi's List to see if there are any other free online resources. But there are some births, marriages and deaths of the British overseas on FamilySearch that you could easily miss. The page above is from one of these registers; it is the register of births from the British consulate in Kansas City, Missouri 1902-1922. Most of the entries are indexed (not all, which is puzzling) but they are listed under 'Great Britain births and baptisms 1571-1971'. I expect this has happened because the records are held here, but it is misleading. I only discovered this by accident when I was a having a good rummage through FamilySearch, trying all kinds of searches. I have reported this to FamilySearch, using the Feedback button - there's a direct link to this page via the big button on the right-hand side of this page.

I don't think I've helped make anything any simpler - the more you look, the more complicated it gets. Keep searching!

Kirsty Wilkinson (The Professional Descendant) made a really useful comment below - you can click here for her link to the list of overseas Catholic registers on ScotlandsPeople.