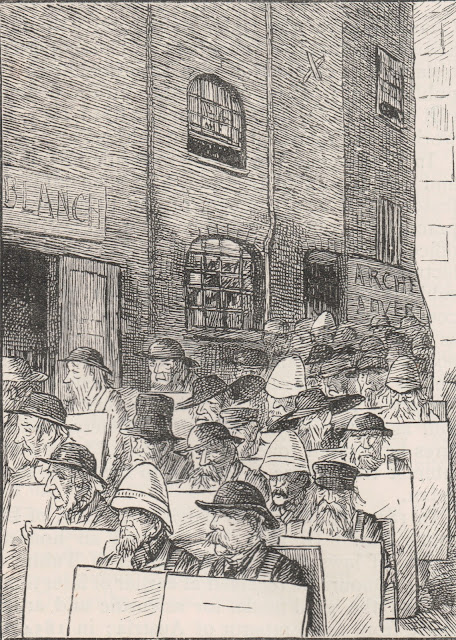 I came across an interesting little article while browsing through a magazine called 'The Leisure Hour', dated 1887. That's the kind of thing I do in my spare time.

It describes a largely forgotten aspect of the retail trade, the way that some shops promoted their wares. The writer describes a scene at 5:30 in the afternoon near Piccadilly Circus.

Two hundred [men] with boards and bills of various colours, are in front of me. They march down into a yard, fall into double lines like a regiment of soldiers, and take off their boards. Every man stands with his board in front of him. a man comes and inspects them when all are in, and soon the process of paying begins.

It is clear from the illustration that these men were a sorry lot. Many were former soldiers who did this work because it was better than not working at all. They were lucky to have been picked at all, since as many were rejected each morning as selected. The best dressed men had the best chance of being picked, and could earn the princely sum of 1s 2d for a day's work walking the streets. They could earn a little more, 1s 6d, if they were prepared to be 'dressed up and made into guys'. For the extra 4d a day they would endure the looks and remarks, and run the risk of being recognized by someone they knew. From 9 till 5, with and hour for lunch they were required to be on on display. If they were caught skulking, they might get no work for several days. These men were recruited and paid by agents, who seemed to make a tidy profit; the men were paid 1s 2d for a day's work, but the cost to the retailer was 2s.

This is a little-known aspect of retail history, and not a very happy one. For the men who did this often degrading work it was not just a low-paid job with a high embarrassment factor. If it was known that you had once 'carried the boards', it could harm your prospects of getting a respectable job in future. The sandwich-board men are often portrayed as figures of fun in cartoons, but I am not sure I will look at them in the same way again. So spare a thought the next time you see someone on a street corner holding one of those big 'Golf Sale' signs, or handing out leaflets in a shopping mall while dressed as a chicken. They are the the modern counterparts of the sandwich-board men, and it probably isn't their ideal career choice either.