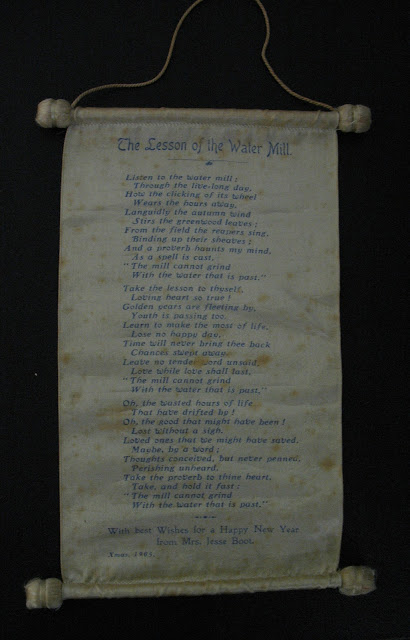 ﻿Boots the Chemist is one of the most familiar names on the high streets of Britain. It began as John Boot's herbalist store in Nottingham in 1849, and became a large and successful company under the management of his son Jesse. Jesse Boot and his wife took a keen personal interest in the company and its employees, and the scroll pictured here is actually a keepsake given to Boots employees for Christmas 1905.
The poem 'The lesson of the Water Mill' is based on a proverb 'The mill cannot grind with the water that is past' - I'd never heard of it, but apparently it dates back to the 17th century. Unfortunately the scroll does not belong to me, but the owner kindly lent it to me to photograph. I wonder how many more of these are still around?
Posted by Audrey Collins at 00:45