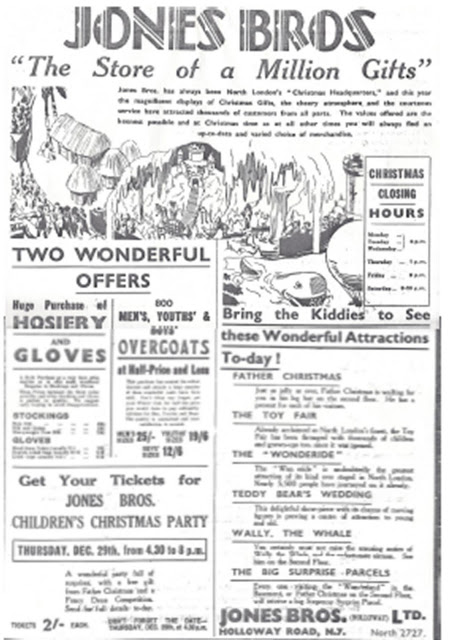 This is a full-page advertisement from the Islington and Holloway Press, Saturday 17 December 1932. Jones Brothers was a department store in Holloway Road, north London. Assorted newspaper adverts show that it was quite a centre for the local community. In the summer there were flower shows and other activities, but the Christmas events must have been the highlight of the year.

There was a children's party, and of course they could visit Santa in his grotto and get a Sixpenny Surprise Parcel. The grotto for 1932 offered


'the Wonderide... undoubtedly the greatest attraction of its kind ever staged in North London. Nearly 5,500 people have journeyed on it already'

Or there was the Teddy Bear's Wedding


'This delightful show-piece with its dozens of moving figures is proving a centre of attraction to young and old. You certainly must not miss the amusing antics of Wally the Whale, and the unfortunate airman. See him on the Second Floor'

This Christmas item has nothing to do with my family, but I worked at Jones Brothers from 1976 until 1990, when it closed, and I have many fond memories of my time there. Although the children's parties as advertised here had long gone before I worked there, the store laid on Christmas parties for the children of the staff; my two boys attended quite a few, and got their presents from Santa.

I remember that at some time in the 1980's some alterations were made to the store, and when some panelling was removed in the basement, the brick wall behind was found to be painted with with scenes from a Christmas grotto from years gone by.
Posted by Audrey Collins at 01:52