Now that these are online at Ancestry as well as Findmypast, you can see them without looking at the household schedules first. If you've never seen these before, they are quite unlike the census returns you have seen for 1841 to 1901. For the first time the statistical abstracts were made mechanically, and this was done directly from the household schedules, so there was no need to have the enumerators copy the results into books, as they had done in previous years. But they still needed to keep a record of the households where they had delivered schedules, and of the uninhabited buildings in the district. They also needed to record the district descriptions and all the summaries and totals that appear in the preliminary pages of the old-style enumeration books.

So the 1911 Enumerators Summary Books are like a version of the old enumeration books, but with some (but not all) names included. The names listed are of heads of household only, but including lodgers where they completed their own schedules.

They are a wonderful resource, but there are a few things you need to know to get the best from them. 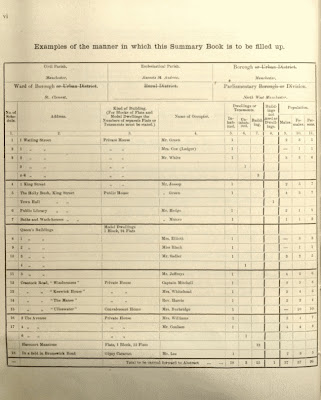 This is a page from the book of instructions to Enumerators, showing how the summary book should be filled in. They were told to list the householders, and the illustration shows them with titles - Mr, Miss, Rev, Captain and so on. So when you are searching this record set on Ancestry, it is best not to include a first name, because they rarely appear. There are also quite a number of people whose surname has been wrongly transcribed as 'Lodger', so if you can't find a family, it might be worth putting their surname in the first name field, just in case!

If you are browsing by place, there are a couple of features to note. As in other census years, you select a county, then the rather unhelpful division of 'Civil Parish', and then 'Sub-registration district' (it really should be 'Registration sub-district', and come after Registration District instead of Civil Parish, because that is the way the census is arranged, but never mind). As in previous census years, you see a list of Enumeration Districts. They are not in strict numerical order, but you can find what you need. They appear the way that numbers do in spreadsheet column if you set it as an alphabetic field instead of a numeric one, and then sort them, so it may be easy to fix. I noticed that only the first district in each list has a 'view description of enumeration district' hyperlink. In fact, there is no need for this at all, since the number links to exactly the same thing - the Enumerator's Summary Book, which includes the description pages.

Once you open one of these to have a look, it may appear a little odd. The pages are not in order, but seem to jump about, and you can only see half of the description, because it is spread over two pages, and only one is visible. This is because the books were dis-bound to be scanned as double-page spreads. So the only two pages you will see together in the correct order are the two in the middle of the book. So look at the page numbers in the corner, and it will start to make sense. Honestly.

Finally, the source infromation provided by Ancestry is a little confusing. Although it contains some infromation specific to 1911, some of it is only applicable to earlier censuses, such as folio numbers, which do not appear at all in 1911. So you read it carefully and it doesn't seem to make sense, don't worry, it doesn't; it's not you. But you can still get a lot from it by just looking closely. Have fun. They have the books for England, Wales, the Channel Islands and the Isle of Man. The Scottish 1911 census will be released in April 2011, but will not have Enumerators' Summary Books.

Email ThisBlogThis!Share to TwitterShare to FacebookShare to Pinterest
Labels: 1911, Census