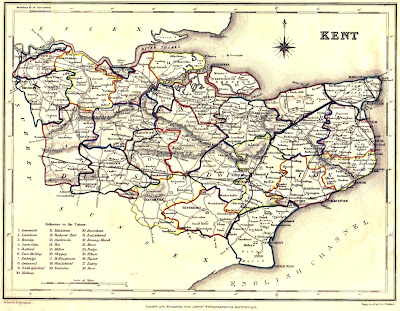 This is one of my favourite maps, and one of the first antique maps I bought, about 20 years ago. I have a particular interest in Kent, and I also lived there from the ages of 8 to 18, so I know parts of the county very well.
The map is undated, and was engraved for Lewis's Topographical Dictionary, of which there were several editions. So I can't date it exactly, but it is 19th century, and has to be later than 1834, when Poor Law Unions were formed, each Union being a collection of parishes grouped together for Poor Law purposes. The key in the bottom left corner of the map gives a number for each Union, and the printed boundaries on the map have been hand-coloured, making it more attractive and easier to read.
For the genealogist, maps like this are particularly useful because Poor Law Unions almost always have the same boundaries as Registration Districts for births, marriages and deaths, established in 1837. Anyone who is familiar with the Phillimore Atlas and Index of Parish Registers will recognise the style of this map, as the Atlas has similar county topographical maps (but without the marked boundaries) opposite parish boundary maps. I have a well-thumbed old copy of the Phillimore Atlas, but I rarely use it now for English research, because the wonderful England 1851 Jurisdictions map, part of FamilySearch, does everything that the Atlas does, and more. And it's FREE! If you haven't already used this fantastic resource, try it out. I've used it quite a bit, but I only discovered yesterday that you can save and print from it too.
Posted by Audrey Collins at 09:25