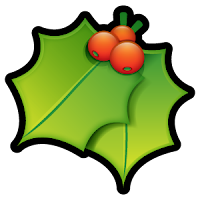 Until I came to write this post I had forgotten how much I enjoyChristmas when I was at school. The school I attended the longest was Chatham Grammar School, where they put up with me for over 7 years. The bit I liked best were the plays or revue that the sixth form put on for the rest of the school; it was always good to see the older girls, and better still the teachers who joined in, making fools of themselves for the amusement of the rest of us. And when you got to that year yourself, it was almost as much fun putting on the show yourselves.

But the show I remember best was one that I never saw. When Iwas in the second year (girls aged 12-13), the Powers That Be decided that we were too young and impressionable to be exposed to one of the performances. Indignation all round, but they were implacable, and we didn't get to see it. We found out later that it was all because of a rhyming couplet in a sketch, apparently some kind of skit on nursery rhymes:


'And where is the boy who looks after the sheep?...
... he's under a haystack with Little Bo Peep'

Do you think I would have remembered that line if we had actually seen the show? Neither do I. I'm really not sure what the moral of that is, but it's funny how some things stick in your mind, isn't it?

Silliness apart, there were some school Christmas traditions that I really treasure. The Mayor used to host a Christmas dinner for old people in our school hall, and we would put on a variety show to entertain them afterwards - we had some very good musicians in the school, although I certainly wasn't one of them. I did take part in a dance routine once, though, to 'I got rhythm'. Trust me, I looked a lot more presentable in a leotard then than I would now, if I were so foolish as to wear one.

But the climax of the Christmas term was of course the very last day of term, when we did no work at all. I seem to remember that they would show us a film for part of the morning, and we could bring in board games, or even records, if we were lucky, to play for the rest of the time. In the afternoon we had final assembly, which was a carol concert. We had singing practice for weeks beforehand in preparation for this, which was a real yawn, but I have to admit it was worth it, because the end result sounded fantastic. some carols were sung by the whole school, with the choir singing descant. They performed some on their own, which sounded even better, and there were songs in all the foreign languages taught in the school, including Latin. We always finished by singing 'The holly and the ivy', as we filed out of the hall to our classrooms, so the whole building was full of the sound of the singing. I had completely forgotten about this last bit until I was halfway through writing this post, and it's been lovely remembering it all. I wonder if they still do that at the school now? I wouldn't be surprised if they do.
Posted by Audrey Collins at 01:34