Have you ever moved house just before Christmas? I have. Twice.
The first time was a very long time ago, when I was 7. We were living temporarily in a very small flat, but with the promise of a larger flat as soon as one became available. I remember being very excited at being allowed to decorate the Christmas tree for the first time. I was not impressed when someone brought us the good news just after I had finished my great work of art! On the plus side, this is where we moved to: 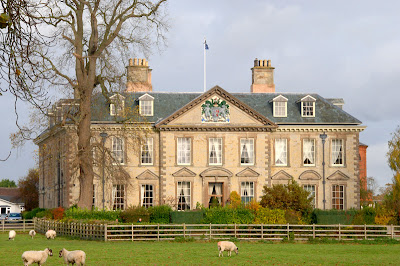 It was still a flat though, and not the whole house.
Nearly 25 years later, I moved house on 20 December, and this time I had a lot more to worry about than a Christmas tree. By now I was married with two children, and had accumulated a house full of stuff﻿. We moved on the very last working day before Christmas, and the people buying our old house had hired themselves a solicitor from 'Nitwits'R'Us', so it took nearly all day to complete, and it was nearly dark before we could actually move in, and of course it was freezing cold too. But we made it, and we were very happy in that house for many years.
And when we had been in the house for five days, it was Christmas, and the whole family came to stay. We had hardly started to unpack, but I still managed to produce a full Christmas dinner for 10 people. It was a lot of fun, because no-one could expect it to be perfect under the circumstances, so anything short of total disaster would have been considered a success, and everyone seemed to have a good time, including me. All the same, if I ever move house again I'll avoid December if I can.
Posted by Audrey Collins at 23:37