Who do you think you are? Live - first day 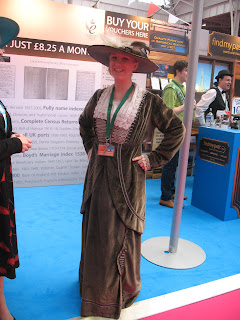 Every year I think I will book a hotel room for Who do you think you are? Live, and then I don't do it because I can get home on the Tube. Then every year as I sit one one of the last trains of the night en route for home in leafy Buckinghamshire I think 'Next year I'll book a hotel room'. Will I ever learn? Quite possibly not.

The 'usual suspects' were in attendance; Ancestry, Findmypast, the Genealogist, FamilySearch and of course the Society of Genealogists. As ever, one of the highlights was waiting to see what the costume theme would be for the Findmypast stand. They started this four years ago with their Edwardian schoolroom and period costumes, and now they make an annual trip to the theatrical costumiers. I actually guessed correctly that this year they would be passengers and crew on the Titanic (not all that surprising really, in this anniversary year). Here you can see Amy Sell in her finery.

Sadly missed, though, was the pricey but fabulous ice-cream stall from previous years. But the sausages are still there, so civilisation has not ended. although there was the usual long queue waiting for the doors to open, the hall seemed a little quiet to start with, but before long the place was buzzing, and all the talks seemed to be well-attended. As usual I spent quite a lot of time catching up with friends that I hadn't seen for a while, although there were quite a number that I last saw at Rootstech earlier this month. The Flip-Pal scanner, such a success when it appeared at Rootstech 2011, was on sale, and seemed to be doing great business, and another welcome import from the US was the practice of live-streaming sessions, used here for the first time by Ancestry. I suspect we will see much more of this in future. The total number of talks in and around the hall has increased yet again; the schedule lists the ticketed presentations in the four SoG workshops, plus unticketed sessions in the DNA area, the Ancestry Academy and on the Genealogist stand. But you can also sit down and learn something on the Genesreunited stand, a first for them, or of course on the deck of the Titanic (see above!).

Today I am on parade at 11am, talking about The National Archives new 'Discovery' system which will replace the old online Catalogue and DocumentsOnline. I am going to break one of my hitherto inflexible rules 'Never work with animals, children, or the internet'. Initially I intended to use a succession of screenshots to illustrate the service, but the more I looked at it the more I realised that this was simply not practical, and I would just have to go for it, and do a live demonstration. I may live to regret this. So if you could all please offer up a silent request to your deity of choice...

Oh well, I can't back out now. After all, what doesn't kill me makes me strong, as they say.

Email ThisBlogThis!Share to TwitterShare to FacebookShare to Pinterest
Labels: Who do you think you are? Live