Those Places Thursday - what do you mean by 'London'? 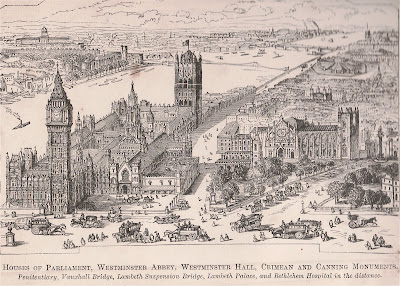 Comprehensive answer - much too long for a blog post, and I'd have to admit to struggling with some of the finer points.

A lot depends on the time period you are talking about. Even today what someone means when they say 'London' depends on the context. If you want an example of this, look at a map and find London's airports - Heathrow, Gatwick, Stansted, Luton and London City; and the current Mayor of London wants to build a new one on the Isle of Grain. If you said you were going to London for a day's shopping, none of these would be on your itinerary (unless you arrived by plane, of course).

London has grown enormously over the centuries, both in area and in population. Like many other large cities it has spread out and engulfed the surrounding area 'The march of bricks and mortar' And by the way, if you are at all interested in London and its history you should get to know and love The Victorian Dictionary. In the Middle Ages London was the small area now known as the City of London  or the 'Square Mile', on the north bank of the Thames. It extended from the Tower of London in the east to Fleet Street in the west. Its northern extent was approximately the modern street known as London Wall (big clue in the name).

As the built-up area expanded over the centuries it joined up with the City of Westminster to the west, and the surrounding areas. Expansion to the east was relatively late, and came about with the development of the London docks, particularly in the 19th century. This is the area known as the East End. The area on the south bank of the Thames also expanded, initially the area known as Southwark, directly opposite the City and connected with it by London Bridge, London's only bridge until the mid-19th century. Expansion on this side of the Thames mirrored that on the north bank, but on a smaller scale.

This is probably the single most confusing aspect of trying to research London ancestors - what county should I be looking in? Most of 'London' is in the county of Middlesex, on the north bank of the Thames, although the City of London itself has never actually been part of Middlesex, having its own independent local government, the Corporation of London. The county to the east of Middlesex, on the north bank of the river is Essex, and some of the eastern districts of modern-day Greater London were once part of Essex, but these were late ie 20th century, additions. 'London' south of the Thames was mostly in Surrey, but eastern districts such as Greenwich, Deptford and Woolwich were originally part of Kent.

The City of London was the only place that was technically 'London' until the formation of the London County Council (LCC) in 1889. But the term 'London' had long been used to refer to the whole of the built-up area, or the Metropolis; for example London Post Office Directories had been produced for several decades before the LCC was born. The new County of London was created from parts of Middlesex, Surrey and Kent, and in 1965 the LCC was replaced by the Greater London Council (GLC) a much-expanded area incorporating further parts of North-east Surrey, North-west Kent, the whole of the remainder of Middlesex and, for the first time, some of South-east Essex. There is a very good colour-coded map illustrating this on the website of the London Metropolitan Archives

The answer to the question 'What county should I be looking in?' should depend on the date of the record concerned. In practice, of course, it's not that simple. Collection of records don't always follow neat parish, borough or county boundaries for a start; then they may have been classified in print or online by people who have chosen not to arrange them according to those boundaries (or may not have   entirely understood them). So, to be on the safe side, always look in both London and Middlesex, or London and Surrey etc, depending on your place of interest. The Collections Information page on the LMA website has some useful information to start with. However, if your family came from Westminster, you will also need to look at the records held by the Westminster City Archives.

This is London, remember. It was never going to be that simple!