This is part of my childhood, and I suppose it's a bit of social history, too. In the years following the end of the Second World War there was a shortage of consumer goods in the UK, and rationing didn't end until 1954. At the same time lots of couples wanted to get married set up home and crack on with producing a whole generation of Baby Boomers (like me). It must have been quite a challenge to gather together all the household goods you needed, and a lot of people relied on gifts of furniture from relatives - I have a dim recollection of a couple of truly horrible armchairs that my parents got rid of the minute they could get new furniture of their own choosing. In the meantime it was better than sitting on the floor, I suppose.

Despite the shortages, there was a ready supply of army blankets, there being a lot less army than before. Army blankets are warm and serviceable, if unattractive, and I suspect they were pretty scratchy too. But patchwork covers could turn them into perfectly good bedspreads. This was fine if you had a sewing machine, but if you didn't, you could do what my mother did and get them through a kind of co-operative arrangement called a 'menage', which was inexplicably pronounced 'man-odge' in Glasgow.  Twenty people each paid a fixed amount every week for twenty weeks, and every week the seamstress made a quilt. Every week lots were drawn and one of the contributors would get a finished quilt. Fabric was not exactly plentiful, so the patchwork was functional rather than artistic, as you can see from the picture above. I think the striped panel in the middle is a piece of mattress ticking. The two dark spots aren't specks of dirt on your screen, by the way, they are cigarette burns, so this is an authentic well-used artefact. The other side doesn't have any burn marks, but the design is even plainer. 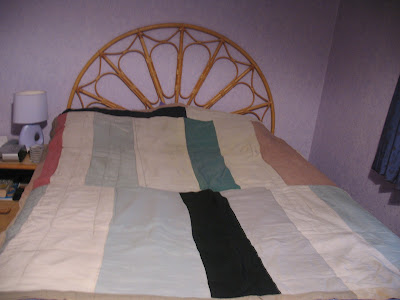 This quilt has spent the last few decades in my mother's airing cupboard, along a single-bed size quilt and a smaller one that was my cot blanket, which we always called the 'heavy mats'. I don't have pictures of the single-bed quilt because it has an unexpected new lease of life as a bedspread for my four-year-old nephew.


Modern bedding is all very lightweight, and he is such a fidget, even in his sleep, that the duvet always ends up on the floor. The heavy mat, on the other hand, stays put. When my parents bought it for my bed, I bet they never imagined it would be in use more than half a century later.

There are no fancy symmetrical or geometric patterns here, lovingly crafted and put together by hand, but I love the heavy mats. They are practical and very much of their time, and they have outlived the 2-ply lacy shawl that my mother knitted for me before I was born. The moths got it.