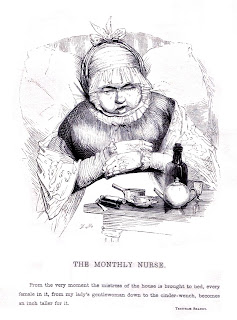 You may have found an ancestor whose occupation was 'monthly nurse' or found one in your ancestor's household. In the British 1881 census there are more than 3000 of them.

The best-known of the breed is a fictional character, the infamous Mrs Gamp in Charles Dickens' Martin Chuzzlewit (yes, that man again).


'...Mrs Gamp being, in her highest walk of art, a monthly nurse, or as her sign-board boldly had it 'Midwife'

The monthly nurse would have been engaged by a family around the time of a woman's 'lying-in' to look after the mother and the new baby. She would have no qualifications of any kind, other than a willingness to perform what could be very messy and often unpleasant tasks. She would also be called in to lay out the dead, and, sadly, the two types of visit often coincided in Victorian Britain. Childbirth was a hazardous business, and many women died of post-partum infections generally known as 'child-bed fever'. Infant mortality was high throughout the 19th century, as you can see from the number of death entries giving the age at death as '0' from 1866 onwards when this is shown in the indexes for England and Wales. In the birth indexes from 1837 you will often see births with no forename but just 'male' or 'female'. Occasionally these are children whose parents hadn't chosen a name yet, but the great majority were poor little mites who lived for only a few hours, or even a few minutes after birth.

Mrs Gamp, however, appears in Dickens' novel when she is called in to perform the necessary offices following the death of the elderly Mr Anthony Chuzzlewit. He paints a vivid picture:

'She was a fat old woman, this Mrs Gamp, with a husky voice and a moist eye...She wore a very rusty black gown, rather the worse for snuff, and a shawl and bonnet to correspond. In these dilapidated articles of dress she had, on principle, arrayed herself, time out of mind, on such occasions as the present; for this at once expressed a decent amount of veneration for the deceased, and invited the next of kin to present her with a new set of weeds; an appeal so frequently successful that the very fetch and ghost of Mrs Gamp, bonnet and all, might be seen hanging up, any hour in the day, in at least a dozen of the second-hand clothes shops about Holborn. the face of Mrs Gamp - the nose in particular - was very red and swoln, and it was diffcult to enjoy her society without being conscious of a smell of spirits.'

It would be unfair to suggest that all monthly nurses were like Mrs Gamp, but Dickens was not the only writer who satirized them. The illustration above comes from a two-volume publication 'Heads of the People: or Portraits of the English', a compilation of writings by a number of authors in the 1830s. The chapter on 'The Monthly Nurse' was written by Leigh Hunt, who, like Dickens, was also a journalist. His description of the monthly nurse was:

...a middle-aged, motherly sort of a gossiping, hushing, flattering, dictatorial, ignorant, knowing, not very delicate, comfortable, uneasy, slip-slop kind of a blinking individual, between asleep and awake, whose business it is - under Providence and the doctor - to see that a child be not ushered with too little officiousness into the world, nor brought up with too much good sense during the first month of its existence.

The writings of both men reflect a time when there was no kind of training for nurses, and no notion that nursing might be a profession. This was to come later in the century. Leigh Hunt was not uniformly unkind about the monthly nurse. Later on in the piece he expresses sympathy for the women whom circumstances had forced into this kind of work, and goes on to describe those higher up the social scale:


'The Monthly Nurse, as you ascend in society, is not seldom a highly respectable woman, who is nearly all that she should be - mild, firm and well-meaning.'

So if you have a monthly nurse in your ancestry, she may not have been a Mrs Gamp after all!