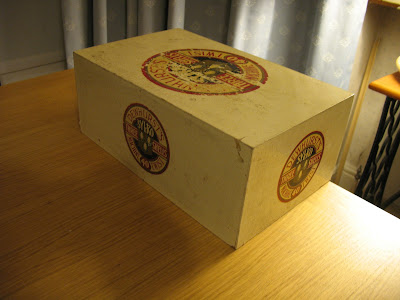 My mother was going to throw this out. Fortunately I was around to rescue it. and now it lives in my sitting room where I can look at it every day. It's a painted plywood box that was used to store reels of sewing cotton in a draper's shop in the 1950s, and my mother acquired it when the shop was modernising or re-fitting, as far as I remember, about 50 years ago.

The top and three sides all have the distinctive Sylko thread logo, which also appeared on the cotton reels themselves, and these were visible to the customer in the shop. You can't see the drawers on the other side, not just because of the angle I chose for the photograph but because, sadly, they are long gone, although the runners are still there. Each drawer held several rows of reels of cotton, with cardboard dividers separating the rows. Mum used it to keep her buttons, needles and other sewing bits and pieces, including of course some cotton reels. I used to love this little chest of drawers, and I remember playing with it when I was small. It came with us through 7 house moves, and at some point the drawers went AWOL, I have no idea when. It hasn't been needed as a sewing box for a long time, because Mum's arthritis means she can't sew any more - not that she was big fan of sewing, she sewed on buttons, mended and even made clothes because she had to, not because she wanted to. Remember when you used to be able to save money by making your own clothes? Knitting was much more her thing.

Here's a close-up view of the logo, although I'm pretty sure we didn't call them logos in the 50s. I like the fact that the box is rather shabby, and that the colours have mellowed a little with age. The box doesn't fulfill any practical purpose these days, it just sits on my sideboard. I keep my buttons and sewing gear in a big layered basket.

Writing this set me thinking about the old wooden cotton reels that were sold from boxes like this. I think I may have a few of them tucked away somewhere, and they are so much better than the plastic ones you get now. Once the thread had been used you could use them to make all kinds of interesting things; you could hammer three or four nails into one end of a wooden cotton reel and and turn it into a 'Knitting Nancy' for making long woollen cords. You could pile them up like building blocks, or turn them into dolls house furniture, or crude wheeled toys - I seem to remember something that involved matchsticks and twisted rubber bands as some kind of propulsion  system. Lightweight plastic just isn't the same.