For a change, I thought I would just post a few pictures that I have collected over the last few years. I have a lot of old books, mostly over 100 years old, and I particularly like ones with engraved illustrations, like the ones here. I have scanned some of them, but only a fraction of the whole collection so far. I am astonished at the quality of some of them; they are often only 3 or 4 inches wide, sometimes smaller, but I can blow them up to A4 size or even larger, and the detail is still crisp. And most of the time we don't even know the names of these amazingly skilled engravers. What a pity.

The lantern-maker is a nice example of one of the earliest kinds of shop, where a craftsman sells the items he has made from his own premises. In this kind of shop, the counter is often also a shutter, hinged at the bottom instead of at the side. 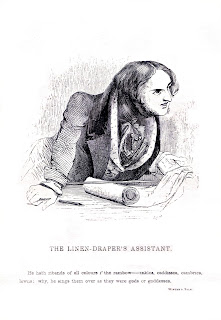 The Linen-draper's assistant dating from the late 1830s


'Hath ribands of all colours i'the rainbow - inkles, caddisses, cambrics, lawns: why he sings them overs as they were gods or goddesses'

Shakespeare: A Winters Tale
and this is one of the few where the names of the artist and the engraver are known. The artist was Kenny Meadows, a very prolific illustrator in his day, and the engraver was Orrin Smith. This picture is one of many portraying  different types of people, from  'Heads of the People: Portraits of the English'.

The last two pictures come from one of my favourite publications, the Girls Own Paper, a late 19th and early 20th century magazine for well brought up young ladies, published by the Religious Tract Society. It's an absolute goldmine.

These are both from the 1894 volume. I particularly like the picture of the newsagent, for the sneaky piece of product placement; the billboard is advertising the Boys Own Paper, its companion publication.

The draper's shop illustration is a wonderful period piece, but what is slightly worrying is the fact that I can dimly remember shops a little like that. The clothes were different, though.

I am happy for anyone to re-use any of these pictures on their own not-for-profit blogs or websites. All I ask for is an acknowledgement on your site.

Email ThisBlogThis!Share to TwitterShare to FacebookShare to Pinterest
Labels: Girls Own Paper, Shops