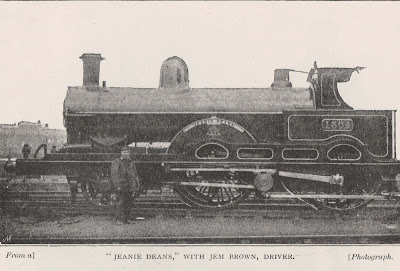 So begins an article in one of the earliest edition of the Strand magazine in 1894. The author, Alfred T Story, described the work and training of these men, and the jobs they would have done in order to progress to the status of engine driver. He then interviewed a number of drivers from three of the major railway companies; London and North Western, Great Western, and London, Midland and Scottish.

A boy might start work in his mid-teens helping with engine repairs, or perhaps as a call-lad, making sure the drivers were up and ready for work early in the morning:


'He must be a youth of nerve and courage. This appears to be especially the case in the neighbourhood of Willesden, where, notwithstanding the very matter-of-fact character of a large railway junction, ghosts have  been known to prowl, putting the call-boys into unseasonable frights'

Later he would gain a thorough knowledge of engines by cleaning them, first assisting a more experienced man, then having sole charge of an engine himself. The next stage was to move up through the ranks of fireman, finally sitting a test after which he would become a full fireman. Eventually he might progress to the sought-after rank of driver. A newly-qualified driver would turn and move engines in the shed yard, then he would pass on to a shunting engine, then local goods trains. He could progress to driving goods trains on main lines, then various passengers trains, and the elite drivers would take charge of better-class passenger trains, and, finally one of the great express trains. 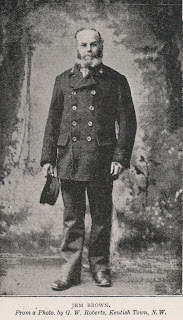 One of the drivers interviewed was Jem Brown, pictured above with one of his engines. He began work as  and engine cleaner with the London and North Western in 1858, becoming a fireman in 1859 and a driver in 1864. In 1875 he was promoted to driving passenger trains. When he was interviewed in 1894 he had been the driver of the Scotch express for three years, and the train had recently been converted into what was called the Corridor Dining Train. It would leave London at 2pm and reach Crewe at 5:20pm. another driver would take it from there, and Brown would return to London with another express train at 7:32pm, arriving back in London at 10:45pm. He and another driver did this run on alternate days.