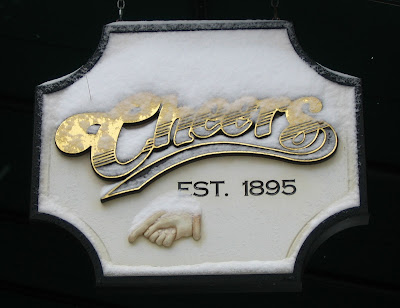 I've had a pretty busy year, genealogically speaking, and had a lot of fun in the process. I have travelled a lot, even by my standards, caught up with old friends and made new ones. I knew that it was going to be a busy year from the outset, and I was determined to enjoy it to the full. I did.
It started in January when I spent a morning filming with Andrew Marr for a TV documentary about the census, shown just before census day in March, 2011 being  census year in the UK. During the year I also spoke at two day conferences devoted to the census, at the Institute of Family and Local History in Preston and on my home turf at The National Archives. I also contributed to a census exhibition at the British Library and spoke at an evening event in the Conference Centre there.
Census apart, I attended and spoke at a number of conferences and events, starting with the first Rootstech conference in February. I wasn't a speaker there, but I gave a couple of talks at the Family History Library while I was in Salt Lake City, where the staff on the British and Irish floor were very welcoming and hospitable, as ever. The conference itself, of course, was a great success and I enjoyed it very much, not just for the lectures and exhibits but for the chance to meet in person a number of people I already knew, but only online, notably some of the official bloggers. I bought myself a Flip-Pal Scanner, and right at the end of the conference my name was drawn as one of the lucky door-prize winners - I got a voucher for a 7-night stay at the Salt Lake Plaza!
When I arrived back home in the UK after Rootstech, it was only a short time until Who Do You Think You Are? Live at Olympia in London. I was there for all three days, two of them as part of my job, representing The National Archives, but on Sunday I went again just for the fun of it, and did a stint helping out on the APG stand, who were exhibiting there for the first time.
In March I completed my census schedule online, and kept the paper copy for posterity, just in case posterity is at all interested. Still kicking myself for being in the US last year, and flying home 5 hours before census day - if I had only thought it out properly in advance I could have come home a day later. Doh! This month was, not surprisingly, the peak of the census-related activity for the year.
April saw the wedding of Prince William and Kate Middleton, and I have to say that my American friends were more interested in it than I was, but we got a day off work and it was fun to watch it on TV. The highlight of the day, though, was taking part in a special British episode of Geneabloggers Radio. No webcam was involved, so doing it in my jammies was just fine.
I was off on my travels again in May, when I had the privilege of being a FamilySearch sponsored speaker at the NGSS Conference in  Charleston SC, another very enjoyable occasion, with lots of time to catch  up with friends and meet some key figures in the family history world. I was flattered to be invited to speak on this year's Wholly Genes cruise, a whole new experience for me. Of course I accepted!
As part of the Family History team at The National Archives, my job involves attending family history fairs around the country, and this year I and two colleagues took our stand to the York Family History Fair. Unfortunately the internet access that we had paid for was a resounding failure, but luckily I had my new smartphone with me, which we were able to use as a portable wi-fi hotspot for two of our laptops. Just as well, because we had a very busy day, and it would have been pretty tricky trying answer ALL of the questions without being able to go online - my memory is pretty good, but it can only retain so much...
July and August were quiet by comparison, when I buckled down to work on the manuscript of a book I was co-writing. Actually, I didn't buckle down as much as I should have done, resulting in an intense period of activity towards the September deadline! I did spend another morning filming, this time for the 'red button' interactive part of Who Do You Think You Are? for the BBC, with one of this year's subjects, the actor Larry Lamb.
September, on the other hand, was a very busy month indeed. I travelled once more to the US for yet another conference, this time the FGS conference in Springfield IL. I usually submit proposals for talks at FGS and NGS events, but I'm not usually successful; this time, to my surprise, I was! It was just coincidence that it happened to be in the same year where I was also going to be at NGS too. Better yet, I was able to make the relatively short trip to Ottawa to speak at the British Isles Family History Society of Greater Ottawa  conference the following week. I had been to Canada once before, but that was in 1986, and I was keen to see it again,particularly Toronto, the site of my previous visit. And I got the chance to do this because an evening speaking engagement was arranged for me at the Toronto branch of the Ontario Genealogical Society.

No sooner was I back home than it was time for the Celebrating the Census day conference that we had been planning for months, and which took place on 1 October. To my great satisfaction (and relief, it had been my idea in the first place!). Some of the sessions were recorded, and the podcasts are in the process of being uploaded to  The National Archives website.
My fourth and final transatlantic trip was in November, to Fort Lauderdale to board the ship for the Wholly Genes cruise. Those Virgin Atlantic frequent flier miles are stacking up very nicely now, thank you. This was a whole new experience for me, and I had a great time, taking care to keep out of the sun as far as possible. This amuses my friends and family greatly, but I really am not good with heat. On board ship, of course, there is lots of lovely air-conditioning, so I managed just fine, and I enjoyed the company of the many genealogists on board.
Now it's December, at least for a couple more hours, and time to look forward as much as back. I doubt I will ever have another year quite like this one, but who knows? It has been the first full calendar year for this blog, and I've had more than twice as many hits this December as in December 2010.
I have studiously avoided mentioning any names in this post apart from Andrew Marr and Larry Lamb whom I classify as public figures for this purpose, since they're not people that I actually know. For the record, though, they were both a delight to work with. There are so many people I could thank for their kindness, hospitality and friendship this year that I would be mortified if I left anyone out.
So happy new year to all, and remember you don't have to make new year resolutions unless you want to.