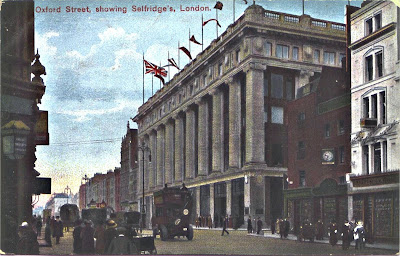 Many department stores started out as drapers' shops, then grew by acquiring neighbouring premises and widening their assortment. Not Selfridges, though. It arrived, fully-formed, at the western end of Oxford Street in 1909. It must have made quite an impact at the time.

Harry Gordon Selfridge 1864-1947 was an American who made Britain his home, although he remained an American citizen and never took British nationality. He was born in Wisconsin, but grew up in Michigan, where he worked for Marshall, Field and Co. He visited London in 1906, and was unimpressed with the standard of the established department stores there, and three years later unleashed his vision on the unsuspecting British nation. He introduced such revolutionary developments as large plate-glass windows, and the art of window display - London's shop windows had previously been crammed full of merchandise. The electric lights in Selfridge's windows were left on outside of shop hours, and the Christmas windows in particular became a tourist attraction in themselves.

Selfridge's personal life was not as successful at the business that bears his name. His mother, Lois, brought up her family unaided, and travelled with her son when he moved to England. His wife, Rosalie Buckingham, died in 1918 in the outbreak of influenza that followed the First World War, and his mother in 1924. Without the stabilising influence of these two women in his life, he neglected the business, while continuing to spend freely from the takings, even through the Depression years. He died in 1947, in very reduced circumstances.

The business went through some lean years, but recovered, and today is still one of Oxford street's major attractions. In Selfridge's day there was a plan to create a direct link to the store from Bond Street underground station - the store has at least three basement levels - but this never came to be. But the store never missed a merchandising opportunity if it could. One innovation was its own range of postcards 'The Selfridge Set' of London View Post Cards. 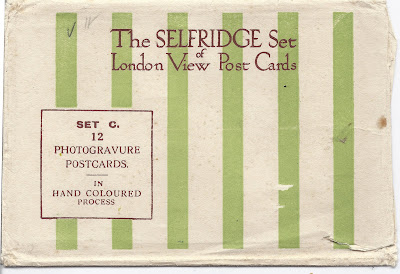 One of these was (surprise) a view of the store itself  'OXFORD STREET - One of London's leading shopping thoroughfares. Messrs Selfridge's magnificent premises shown in this view are a landmark for visitors to London, where this firm have made shopping a pleasure'.

Selfridge's has often turned over large amount of floor space to exhibitions, rather than cramming every square foot with merchandise. In the centenary year there was an exhibition in the basement devoted to the history of the shop and to the Selfridge family. It says everything about the Selfridge commitment to retail as showbiz that the centrepiece was a life-size model of Gordon Selfridge made entirely of jelly beans!