Today would have been my dad's 84th birthday. As you can see from the dates above, he didn't make it past 55 (he died in January, and his birthday was June). So I thought today would be a good day to write a post about him.

Like most other British men of his generation, he was called up for National Service. He served in the army, working as a storeman in the Royal Army Ordnance Corps. When he enlisted in 1945 at the age of 18 he was just over 5ft 4in tall, with a chest measurement of 33in, and weighed only 115lbs!

All these details are in his army pass book, which I still have. Fortunately the wee girl who scribbled on it (who, me?) used a pencil, so I was able to remove the marks with a soft eraser. One of the pages in the pass book is the standard will form that soldiers were required to complete, so it contains his signature, and those of two witnesses. I wonder if C Thompson and G Cruickshank of the Seaforth Highlanders are still alive? 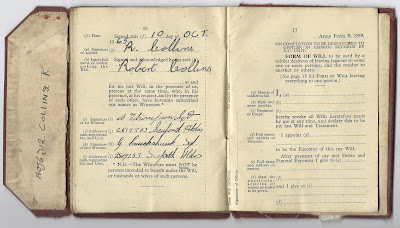 Dad spent much of his time at Tel-el-Kebir in Egypt, and my mother still has some pictures of him there, complete with camels, pyramids etc. Because he was in the army from 1945 to 1947, he didn't see any active service, unlike one of his younger brothers who served in Korea. He mostly had a pretty good time, and enjoyed his work. He told me about some of the perks of working in stores, such as having two sets of kit - the set you actually wore, and a second set, brushed, pressed and polished to perfection to be produced for kit inspections!

This is one of my favourite pictures of him, relaxing on his bunk and enjoying a beer. He looks equally happy in the other pictures that we have from his time in Egypt.

He sometimes wondered if he should have made a career in the army, and perhaps learned a trade. In civilian life he had no qualifications, unless you count the possession of a driving licence. He would have made a good engineer, or electrician, or something similar. He was always very practical, and good at DIY and tinkering with cars, and so on.

But I'm glad he didn't stay in the army, because then he might not have met my mother, and I wouldn't be here! He died before I started doing family history in earnest, so I never got to share any of my finds with him. I'm sure he would have been interested, and would have given me even more information. But I did ask him about his family while I was in my early teens, and some of what he told me came in very handy. I still miss him, and I think about him every day.