There have been a number of funerals in Soap-land recently. For the benefit of anyone outside the UK, our two longest-running soaps, The Archers (60, radio) and Coronation Street (50, TV) have marked their significant anniversaries by killing off central characters in highly dramatic circumstances.

This is as good an excuse as any for looking at the business of mourning in the past. And I literally do mean 'business'. As you can see from this advert from January 1887, there were entire shops devoted to mourning apparel and accessories. Nowadays, if we have to attend a funeral we wear black, quite possibly drawn from items we already own, with maybe a quick dash to the shops for a pair of gloves or a black tie. If the deceased is a close family member we might even wear black or subdued colours for a while afterwards, but that's about it. The Victorians, on the other hand, made a great deal more of the period of mourning, and the richer they were, the more they would spend on it.

There are a number of interesting features in this advert. First of all, the shop is 'Peter Robinson's Court & Family Black Goods & Mourning Warehouse'. Any draper's shop or department store worth its salt would have a mourning department, but the really big players, of whom Peter Robinson was one, had a completely separate shop selling much the same goods as the main shop, but in black or grey. You will notice that the items listed are not just items of regular day-wear, but also evening gowns, opera capes, accessories and even undergarments. There was a whole elaborate etiquette of mourning, depending on the closeness of your relationship to the deceased, and the length of time since the death. This of course provided many opportunities for the canny retailer to sell not one, but several, outfits to the bereaved - the ideal customer would be the newly wealthy widow with a social position to keep up. But even those of modest means would expect to have a decent set of mourning clothes, and with large families and lower life expectancy than now, you could be in some degree of mourning for quite long periods. The fact that they were having a January sale indicates that they expected people to stock up for the coming year's bereavements. Lovely. 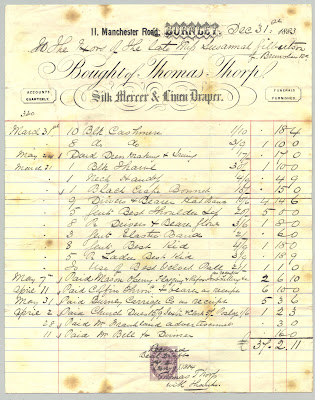 This bill of sale dated four years earlier is from a much smaller provincial establishment, Thomas Thorp, Silk Mercer and Linen Draper of Burnley, Lancashire. The bill-head shows that he also arranged funerals, and the details of the bill itself bear this out; after the list of clothing and drapery items is a fascinating glimpse into the fumeral service provided, and how much they cost, from carriages to catering. The bill-head also says 'Accounts quarterly' but this bill is dated a full nine months after the funeral concerned.

The deceased in this case was an 82 year old spinster, Susannah Gilbertson, who is described in the census as 'annuitant', 'landed proprietress', or 'no occupation' although in 1851 she was a schoolmistress. and was probably living on the income derived from a legacy. The value of her own estate when she died was £323 13s 10d.
Posted by Audrey Collins at 00:49