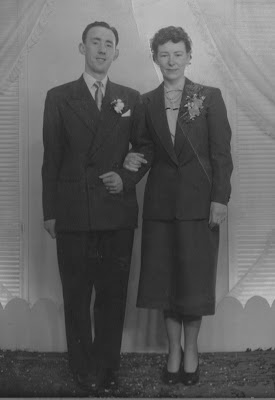 Sixty years ago today my parents were married, the only Valentine's Day wedding in my whole family tree, so far. Sadly, it's not also their diamond wedding; although Mum is still going strong, Dad died 30 years ago, just short of what would have been their pearl wedding.

Theirs was a Registry Office ceremony - England has Register Offices, but this was in Scotland, where Registry Office is the correct term. Scottish marriage law is quite unlike English marriage law, and the Registry Office wedding was a relatively new phenomenon there. My paternal grandparents married in a Roman Catholic church, and my mother's parents had a Church of Scotland ceremony in a private house, the home of the bride's sister. I also have a few marriages in my tree 'by declaration' ie before witnesses, with no religious ceremony.

Although my parents' wedding was a few years after the end of the Second World War, many commodities were still in short supply, and a few were even still on ration - rationing didn't end until 1954, Mum told me that her nylons were sent from South Africa, and although you can't tell from the black-and-white photo, they were a grey-blue shade to go with her suit, and not the so-called 'flesh' coloured ones she would normally have worn. She also told me that the photographer made a big fuss about how romantic it was to get married on Valentine's Day, but in fact it had more to do with the tax year. Until at least the 1970s it was advantageous to marry close to the end of the tax year, because you got the Married Man's Tax Allowance for the whole year, even if you were only married for the last couple of weeks of it. Mother always was, and still is, of a very practical turn of mind! The date of Easter also had a role to play; neither of them was particularly religious, but some family members were, and getting married during Lent wasn't 'the done thing'. Easter happened to coincide with the end of the tax year in 1953, so they chose the last Saturday before Lent,which just happened to be Valentine's Day, that's all!

Mum still has many souvenirs of the day; a pair of decorative silk banners, all the cards and telegrams and of course the photographs. I have the (now rather battered) floral centrepiece from the wedding cake, which had pride of place on my wedding cake 25 years later