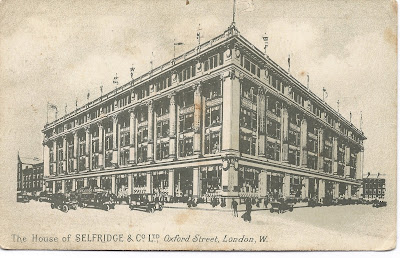 It may or not be the new Downton Abbey (and that may or may not be a good thing) but Mr Selfridge continues in the prime 9pm slot on ITV. It is certainly is gorgeous to look at, especially the hats. I thought it started off rather slowly, but there was a lot of scene-setting to do and a lot of characters to introduce. I think it's worth sticking with - Harry Gordon Selfridge was a colourful character, to say the least, so it shouldn't be too hard to make a decent drama out of his life story, and Andrew Davies is one of the best writers around.

Even before he arrived in London Harry Selfridge had already achieved a great deal. He had already made a name for himself at Marshall Field in Chicago where he earned the nickname 'Mile-a-minute Harry'. He started work there in 1879 as a stock boy on $10 a week. Field Leiter, as the store was then called, had been rebuilt following the great Chicago fire of 1871, and the magnificent new building on State Street was described as a 'marble palace'. Selfridge started in the wholesale side, but his heart and his talent lay in retail, and he rose rapidly to the higher ranks of management. His philosophy was to make the store a 'pleasure-filled rendezvous' for women, and to this end he opened new departments devoted to shoes, childrenswear and even glove-cleaning. In 1890 he introduced a tea room where his lady customers could watch mannequins modelling the latest fashions. He brought these and other innovations to London when he opened his own store.

He finally left Marshall Field in 1904 when Marshall Field denied him a full partnership refused to rename his store Field Selfridge & Co. He bought the business of Schelsinger & Mayer, also on State Street, but found that he was unhappy at 'competing with my own people' and sold the store only 3 months later for a good profit. He was a very wealthy man and could afford to retire, which he managed to do for a while, growing roses and playing with his children, but he had too much energy and too many ideas to keep this up for long. While on a trip to Europe in 1905 he decided that London was just the place for him to launch his retail revolution, and the rest is history. Or the TV show, if you prefer. It's fiction, with the requisite amount of dramatic licence and sub-plots, but many of the incidents and characters are absolutely true. In the first episode, for example, he had a business partner, Mr Waring, who withdrew his backing at the last minute, and this actually happened, as you can see from this announcement in the London Gazette. 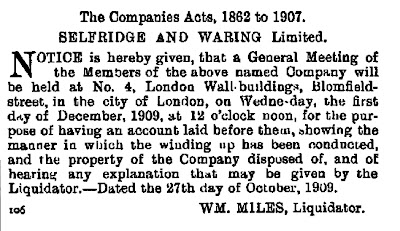