As part of the day job, I have been looking at the census statistics for institutions such as workhouses, barracks, prisons and so on. As I looked though the tables of the 1911 Census Report, it struck me that several London institutions were not in London at all, but in the adjacent counties. Even withing London, some were outside the actual parishes to which they belonged. For example, the St George Hanover Square workhouse was in Fulham.

The reason for this is obvious, when you think about it. London was full. From the early 19th century, if a London parish needed to build a workhouse, or even bury its dead, there was no space in the centre of town, so they had to look for available land further afield. As London grew, and with it the demand for workhouses, hospitals and more, these institutions were built further and further afield.

I decided to plot the positions of the London institutions that were outside London altogether, using Google Maps and the results were rather interesting. I also colour-coded them, red for workhouses and homes, dark blue for schools, light blue for asylums and green for hospitals and convalescent homes. I also added some details about each one, including the number of staff and inmates. The locations are approximate, although I may be able to refine them as I find out more about each of them. Meanwhile, they give a reasonable indication of how far London habitually removed some of its poor and needy.

Furthest afield are sanatoria and convalescent homes, some of them is seaside resorts, but by far the greatest number of displaced Londoners were in asylums. Nowadays we would call them mental hospitals, but in 1911 terms like 'Lunatic Asylum' were considered perfectly acceptable; Several of them had more than 2000 inmates. 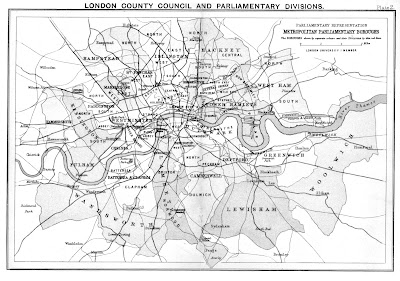 This 1896 map gives some idea of the area covered, although it also includes parliamentary constituencies, which have slightly different boundaries - the main difference being that West Ham is not part of the London County Council area.
So you may find that members of your family you have always considered to be Londoners are a long way from home on census night. Most, though not all, of these places were Poor Law institutions of some kind, so the place to look for more information and links is of course Peter Higginbotham's The Workhouse site. Many related records will be found at the London Metropolitan Archives, and some are even online at Ancestry.co.uk