Every new system takes some getting used to, and as new systems go, the introduction of Civil Registration in England and Wales was a pretty big one. Most of us know that a number of births went unregistered in the early years, for a variety of reasons. There was some under-registration of deaths, too. People went to church to get married just as they had always done, and may not even have been aware that the paperwork was different from 1 July 1837 onwards. Going to a registrar to give details of a birth or death was a completely new experience, however, and it took a while before everyone got the hang of it.

Some people actively refused to register the births of their children, claiming that a Church of England baptism would suffice, and the law was certainly a little unclear on this point. This disobedience was encouraged in a few places by parish clergy, and the registers of Home Office correspondence contain many letters from exasperated registrars complaining about them. They usually emphasised that these were isolated cases, and that they had no problems with other parishes in their districts.

Whatever the reasons for the low rate of registration at first, things picked up after a shaky start in the first two quarters, as this table from the First Annual Report of the Registrar-General shows: 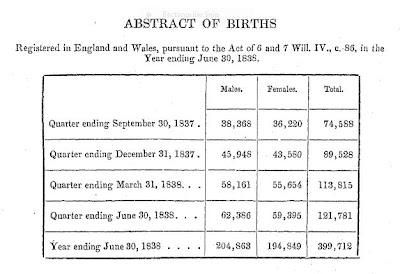 The 'difficult' parishes were spread around the county, although Yorkshire had its fair share, but there was another problem that was particularly relevant to Yorkshire; registration districts were based on the Poor Law Unions that had been established in 1834, but in some areas the unions had still not been formed by 1837, many of them in Yorkshire. Home Office correspondence also includes the following:


'Draft of proposed letter from S M Phillipps, Home Office, to each of the magistrates of the Huddersfield Division about the non-implementation of the legislation for the registration of births, marriages and deaths, resulting from the failure to elect a clerk to the guardians. The Registrar General will ask the Poor Law Commissioners to appoint registrars and assign registration districts and he will put the created districts under neighbouring superintendent registrars. The Home Secretary wishes the magistrates to act in their ex officio capacity as guardians and participate in the election of a clerk (Ref: HO 73/54 ff29-32)'

As it happens, Huddersfield was also one of places where the registrar, once appointed, had problems with a number of people refusing to register. In fairness to the clergy, he does not mention that the opposition had anything to do with the Church, but it certainly was organised, with a number of men defying the law, because '...and several others, now believe nothing can be done to compel them' . One of them, Charles Horsfall, even threatened him:


'Horsfall G-d d--med the Act and those who made it - d--med my soul to Hell, threatened to knock my d--m'd soul out of me, and to throw me neck and heels out of his Castle and held his fists in my face &c &c &c...I think he, of all the refusers, ought to be persecuted, for he is quite a great man among the disturbers of this neighbourhood' (Ref: HO 39/5)

Now that parish registers from the West Yorkshire Archives Service are online at Ancestry.co.uk I thought that it would be interesting to compare baptisms with entries in the GRO birth indexes to see who didn't register births, and to see if there was any pattern to it. Yes, this is the kind of thing I think is a fun pastime for a damp bank holiday weekend, sad but true. I had barely started on this when I discovered something rather surprising - there are some registration districts for which there are NO ENTRIES in the first one or two quarters of Civil Registration, and nearly half of them are in Yorkshire. This is probably due to the late formation of Unions, enforced by the Registrar General for registration purposes, but it will take quite a bit more research to find out for certain. I also noted a few districts where only a tiny number of events were registered. Here are the details of what I found for Yorkshire registration districts:

There were five districts in the rest of England:

The remainder were in Wales:

There are  no problems with marriages - well, actually there are, but that's a different story altogether. But marriages were recorded from day one, and copies were collected by Superintendent Registrars to be sent on to the GRO. They did not involve the registrars of births and deaths,  the absence of whom seems to be at the root of the missing quarters detailed above.