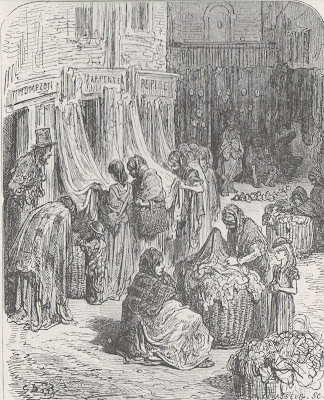 I have always been fascinated by the history of shops and shopping, and I have quite a collection of books on the subject. There are books on department stores, corner shops, well-known shopping street, famous high-street names and reprints of old catalogues. But many of our ancestors (well, many of mine, anyway) would have made their purchases in places that are not mentioned in any of these histories; they bought things second-hand. Think about it. If you were poor, and many people were, you couldn't afford to buy much, and even the cheapest new clothes might be beyond your reach.

You won't find company histories of dealers in second-hand clothes, or other goods, and there are no famous names that have come down through the ages. These traders did not always have shop premises either; instead they might have worked in street markets, or just streets. You might find them listed in directories as 'general dealers', 'wardrobe dealers' or 'marine stores'. In a post earlier this year about the monthly nurse I quoted Dickens' description of 'the very fetch and ghost of Mrs Gamp' hanging at the second-hand clothes dealers around Holborn. In Bleak House he paints an equally vivid picture of a marine store dealer's premises.


'She had stopped at a shop, over which was written, KROOK, RAG AND BOTTLE WAREHOUSE. Also, in long thin letters, KROOK, DEALER IN MARINE STORES. In one part of the window was a picture of a red paper mill, at which a cart was unloading a quantity of sacks of old rags. In another, was the inscription, BONES BOUGHT. In another, KITCHEN-STUFF BOUGHT. In another, OLD IRON BOUGHT. In another, WASTE PAPER BOUGHT. In another, LADIES' AND GENTLEMEN'S WARDROBES BOUGHT. Everything seemed to be bought, and nothing to be sold there. In all parts of the window, were quantities of dirty bottles: blacking bottles, medicine bottles, ginger-beer and soda-water bottles, pickle bottles, wine bottles, ink bottles: I am reminded by mentioning the latter, that the shop had, in several little particulars, the air of being in a legal neighbourhood, and of being, as it were, a dirty, hanger-on a;ud disowned relation of the law. There were a great many ink bottles. There was a little tottering bench of shabby old volumes, outside the door, labelled "Law Books, all at 6d."...
...There were several second-hand bags, blue and red, hanging up. A little way within the shop-door, lay heaps of old crackled parchment scrolls, and discoloured and dog's-eared law-papers. I could have fancied that all the rusty keys, of which there must have been hundreds huddled together as old iron, had once belonged to doors of rooms or strong chests in lawyers' offices. The litter of rags tumbled partly into and partly out of a one-legged wooden scale, hanging without any counterpoise from a beam, might have been counsellors' bands and gowns torn up.'