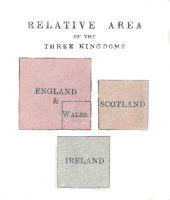 Beautiful coloured maps are obviously the main attraction in and old atlas, but there may be all kinds of other interesting information too. These two diagrams are from Bacon's Atlas of the British Isles 1890.

'Each square represents one tenth of a square mile, the dots giving the number of inhabitants on an average for each country on that area'

All the information is drawn from census statistics, and a number of more conventional census tables are also included in the atlas. One of these is a bar chart showing the actual population figures, and it is worth remembering that while the population of England, Wales and Scotland grew steadily over that period, the population of Ireland increased until 1841, and then dropped sharply, so that by 1881 it was less than it had been in 1821, the year of the first census in Ireland.

The atlas also has a handy list of the Principal Towns, arranged by county, with a one-line description of each. Some of my favourites include: