I want to start by pointing out that I am not in the habit of reading the Daily Mail. Someone sent me the link, OK. Just so long as we're clear on that. The business in question is R J & W Balson, family butchers of Bridport in Dorset, which started with a market stall in 1535, run by one John Balson. The article in the newspaper shows the current proprietor of the business, Richard Balson outside what looks like a very handsome shop. 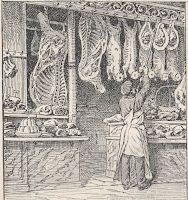 A brief look through Ancestry, Findmypast and FamilySearch reveals plenty of entries for the Balsons , and Richard does seem to be a popular name in the family. There is quite a lot of material online, in the Dorset wills and parish registers on Ancestry, as well as census returns and birth, marriage and death indexes. If the Balsons wanted to trace their family history it would be fairly easy for them - but they may not need to because so much has been passed down through the generations.

What is remarkable about the family is not just that they have followed the same trade for so long, but that they have done so in the same place. When I used to trace other people's family histories for a living, I often found families who lived in the same general area for several generations, but to be settled in a single parish for one or two centuries, let alone nearly five, is extremely rare.

The business has occupied its current premises for over a century, but they also supply their speciality sausages all over the world through their website. Quite a change from a market stall in Tudor times, but like all successful retailers they are moving with the times.This is what generations of Balsons before them must have done, to keep trading successfully for such an astonishingly long time. Long may they continue.