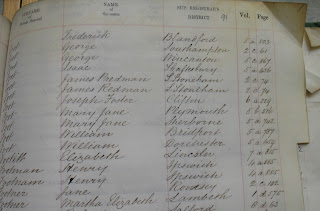 I recently delivered a talk at Rootstech 2018, which was well-received, and this spurred me on to return to some work I did on comparing the online indexes that appear on various websites. This post is an overview of the main sites and their coverage, and will be followed by more in-depth looks at the individual sites. Anyone who doesn't mind listening to me for an hour can view the Rootstech presentation in full.

indexes Indexes to the birth, marriage and death registers for England and Wales are very widely available. You will find them on a number of sites, some free, some commercial. Although the records are (theoretically) the same, there are differences between the various indexes, and it is worth knowing about them to get the best results from your searches.

There is a single set of records for births, marriages and deaths since 1837, held by the General Register Office (GRO). But this is not the only set. Births and deaths are registered at a local Register Office, and the original records are still held locally. The central registers were compiled from copies sent to the GRO, called quarterly returns.

Marriage registers are a little more complicated, because marriages could be performed in a number of places; principally, churches of various denominations, synagogues, Quaker meeting houses and register offices. The original registers may be with the church (or more usually a local record office), or at the register office, but, like the births and marriages, the GRO marriage registers were compiled from the quarterly returns.

The main sites where you can consult indexes to GRO registers are:


None of them is complete, and they all have their strengths and weaknesses, so it is worth using a combination of them for best results. The most recent indexes are not online anywhere, they can only be consulted on microfiche at selected locations – details of these are on the GRO site.

FreeBMD 1837-1983
As the name suggests, this is a free site, the result of an enormous amount of work by an army of volunteers. It is still a work in progress, although the coverage charts for births, marriages and deaths show that it is virtually complete up to the early 1960s, but with many gaps after that. It ends at 1983, the last year before the indexes were ‘born digital’ and the databases were retained by the GRO.

Ancestry 1837-2005 (births and marriages) 1837-2007 (deaths)
This is a commercial site, but there is free access at many libraries, record offices and FamilySearch centres. However, Ancestry’s indexes 1837-1915 for all three events come from FreeBMD, and so are still free to search on Ancestry. You will not always get identical results from the two sites because both allow users to submit corrections, so any amendments or updates to FreeBMD after Ancestry acquired the data will only appear on FreeBMD. Similarly, any changes made on Ancestry will not appear on FreeBMD. Indexes from 1916 to 2005 (births and marriages) and 1916 to 2007 (deaths) are Ancestry’s own. You can also browse the images of the index volumes 1837 to 1983.

FindmyPast 1837-2005 (marriages) 1837-2006 (births) 1837-2007 (deaths)
Also a commercial site, but with free access at many libraries record offices and FamilySearch centres. All of the indexes on FindmyPast were prepared independently of those on FreeBMD or Ancestry. You will also find them on www.Genenesreunited.co.uk, which is owned by the same company. You can also browse images of the index pages 1937 to 1983. The indexes can also be searched free of charge on www.familysearch.org

General Register Office 1837-1917 (births) 1837-1957 (deaths)
These indexes are free to search, but you need to register an account with the site and log in to use them. You need to do this anyway to order certificates from the GRO; ordering GRO certificates from anywhere else will cost more, and take longer. The GRO’s own indexes are the newest to appear online, and are limited in coverage, but they were created by re-indexing the quarterly returns. All of the others are transcriptions of the existing indexes.

MyHeritage 1837-2005
It is not clear from the MyHeritage site whether they have compiled their own indexes, or obtained them under licence from another site. As well as the three databases for 1837-2005, there is a GRO birth index for 1911-1954. This is one of the three major commercial sites worldwide, along with Ancestry and FindmyPast, but has a relatively low profile in the UK, so it is less likely to be available free of charge in record office and libraries, but there is free access in FamilySearch centres.
The Genealogist 1837-2005
These indexes were prepared independently of the others, and are also available  on www.bmdindex.co.uk which belongs to the same company.  FamilySearch centres have free access, and some libraries and record offices may also have free access; but it is much less widespread than the two main commercial sites.