What did you do in the War, Grandpa? 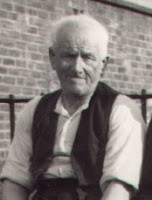 I never actually asked him because he died when I was four, but I have found out quite a bit, as it happens. Today would have been his birthday if he'd lived to a record-breaking age, so it's a good day to remember him.

The picture on the right is the grandpa I remember, although more cheerful - he always looked grumpy in pictures, I have no idea why. He always wore a collarless shirt and a waistcoat, and he always had a tiny little stub of a pencil in the pocket. I would say 'draw funny man' and he'd take out the pencil and draw little clown pictures for me.

He was born and died in Govan, and like many men there he worked in the Glasgow shipyards; when he married my grandmother in 1917 the marriage certificate showed his occupation - iron driller - and the ship that he was serving on, HMS Emperor of India. I had known that he was in the Royal Navy, but when I found his service record I was surprised to find that he seemed to have only joined the navy in August 1917. If I had looked closely I would have noticed that the marriage certificate, dated four months earlier, gave the name of his ship.

The answer was that he had been on board HMS Emperor of India since 1915, but as a member of the Royal Naval Division. His record on HMS Emperor of India was exemplary, but after he transferred to HMS Ramilles in January 1918 it was a different story. He was court-martialled for wilful disobedience of lawful commands, and an act to prejudice of good order and naval discipline. He then made things even worse by escaping from custody. Orders for his demobilisation were cancelled, and he was recaptured and imprisoned in June 1918. Fortunately for him, he never served the year's imprisonment with hard labour to which he originally been sentenced. In October 1918 his sentence was suspended and he was released to civilian life. He was not alone in his misbehaviour, his shipmate James Finlay, from Leith, was convicted of the same offences at the same time, and they escaped together. I haven't been able to discover any more about the actual incident so far, but I may get to the bottom of it one day. I do know that while he was locked up he read the Bible. He was never at all religious, but since it was the only reading material available he read it just to pass the time. He had a remarkable memory, and for the rest of his life he could quote extensively from it.

In fact, he signed up for the Royal Naval Volunteer Reserve a few days before his 20th birthday in 1915.

He was very keen on ships, that's for sure, whether building them or sailing on them. The family story goes that when he was having a row with my Granny during the Second World War he stormed out of the house saying that he was going to join the Navy again, and he'd be killed at sea and then she'd be sorry! The Navy didn't want him; as a skilled man he was much more valuable in the shipyard!

I don't have a photograph of him in uniform, but there a picture of him with my grandmother, probably taken around the time they married, although it is not a wedding photograph.

He was the fourth of thirteen children, and his three elder brothers were also of an age to serve in the First World War. I have found no trace of the two eldest brothers serving in any of the armed forces, but the third one, George, served in the Highland Light Infantry and was killed towards the end of the war, in August 1918.