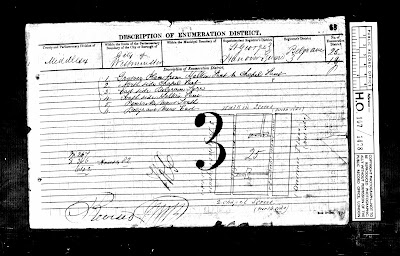 In the census you occasionally come across a description page for an enumeration district like the one above in 1851, which includes a sketch map of the district as well as a list of the streets it contains. I found this one while I was working on one of my pet projects, the story of the people who worked for the General Register Office at Somerset House.

I have been able to find some of these men in the census, and where I could identify them on a modern map of London I have plotted them using Google Maps. I created a map which I have called General Register Office staff. Each marker represents a member of staff in a particular census year, and its tab shows the man's name, the census year, his address and his post in the GRO at that time.
The markers are also colour-coded 1851  red, 1861 - blue, 1871 - pale blue, 1881 - yellow. It's an ongoing project, so not all census years are included yet, and I also need to do more work to locate some addresses where the street names have changed, or where the streets have disappeared altogether.
I found the census map particularly interesting because the one of the streets shown, Chapel Street, was the home of the Registrar General at the time, George Graham.